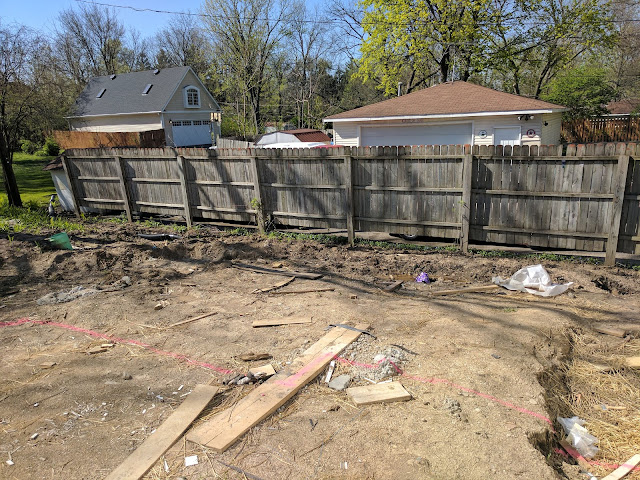 Above is a photo of the northern side of our new lot in our backyard that is almost immediately outside our backdoor.  That fence, it turns out, belongs to our neighbor to the north, but is installed incorrectly (with the 'good side' facing his side and a bit too tall), so things are changing, I believe.  We've heard from our builder that the fence might be coming down and getting readjusted.  But, we hope it isn't going away.  That's because it is shielding their driveway - which is currently occupied by a few project cars and some other larger items.

We are investigating a fence for ourselves (btw, this would be our second fence. Here's a post from way back in 2011 when I was staining our newly installed fence at our old place.) , but because of the way the lot is graded, this part of the property is a lot lower than the middle part, where our house is located.  That means that it is really easy to basically see 'over' the current fence.  And if it has to get lowered to 6', it will be even easier to kind of 'see' over it.

We've been talking to the landscaper who is involved with our new house (he's putting in the patio, grading the lot, doing the sod/grass, etc) and he thinks that one way to solve this is by putting in a narrow-growth and fairly upright set of trees along the property line.  The tree he was recommending was a Chanticleer Pear Tree.  It is a flowering Pear Tree that turns out, is also known as the "Cleveland Select Pear".  Check out this little line from psplants.com:

Cleveland Pears.  Love them.  And have a history of planting them.  Here's a post from 2012 showing the first Cleveland Pear tree that I planted at our old place.  This one was out front of our porch.  That one was bought late in the season at Wal-Mart of all places and was just $5 total.  Yeah...a $5 tree.  It followed the typical 'sleep, creep, leap' pattern, but then kept 'leaping' every year.  It grew and grew and grew.  It was very tight in it's limb pattern.

I liked it so much that I ended up coming across five more Cleveland Pears in subsequent years and picked them up on another deal.  I planted two of them in two rows at the 'entrance' to my old garden.  They were small when they went in, but now, if I drive by slowly (and kind of creep), I can see them shooting up over the top of the fence and doing what I wanted:  frame the entrance to my raised bed garden.  The new owners have kept them and hopefully they're enjoying what I envisioned I was going to enjoy:  a kind of allee of sorts of Cleveland Pears.

Back to our current situation:  the recommendation was to plant six or seven of these flowering pear trees along the lot line.  They'd be lined up from the rear of the house all the way to the existing set of large trees - basically planting a series of them about eight feet apart along that entire stretch of fence you see in the photo above.  The ones that he's spec'ing are MUCH larger than the ones I've bought in the past, but they're also way, way, way more expensive.  Like $700 each planted.  Yowsa! We might go the route of doing Cleveland Pears, but because I like to garden AND it seems like the price to have them installed is out of our budget for now, we might be buying a 1" caliper variety from Menards or Home Depot and doing the planting ourselves to save lots of dough.

One advantage of these pear trees is that despite an extensive root system, they have a pretty shallow root system, which will be helpful because this is located somewhat close to the drywell that we installed in the backyard to control water and rain run-off.

The other option is thinking about a 'living fence' via an espalier'd tree or two.  As the title of this post indicates, there's another 'troublespot' in terms of privacy on the other side.  It isn't as much of an eyesore as this side, so perhaps the trees that I'd like to espalier could go on the south side.  Espalier, you say?  Yeah...seems like a really interesting, fun, and quite useful project doesn't it?
#newoldfarmhouse backyard cleveland pear trees downers grove espalier fence flowering trees linden trees living fence new old house privacy trees
Location: Downers Grove, IL, USA