The folks over at Lionel Trains have recently released their 2018 catalog or 'Big Book' as they call it.  You can find it here in this magazine-style viewer.  Or you can download it as a pdf here.  I've been thumbing through it and like a kid with the old Sears Catalog, I've been circling the items that I'm interested in and will likely pre-order.  The catalog is split between O-Scale and O-Gauge.

O-Scale is Lionel's premium product.  And it isn't meant for kids.  The locomotives and cars come with high-end features, are more realistic - meaning they are true 1:48 scale, all have built-in bluetooth/other power controls and cost quite a bit more.  We're talking about $700 to $900 for a locomotive.

O-Gauge is where we play.  They now call it 'traditional O-Gauge'.  The pieces are smaller than O-Scale (not by much) but still run on the same 3 rail track that Lionel is famous for.  This is also where they seem to have more fun with things in terms of licensing and operating cars.  Think...Disney-themed boxcars like this Dumbo one and this Santa and Snowman 'tag' car.

The catalog seems to be pretty evenly split across the 200+ pages, but because I download it and print it out, I can pretty much toss the first half and focus on the second half.

I'll spend a little bit of time over the coming weeks posting some of the newly listed items that I think are worth considering and might end up in our pre-order at Trainworld this year.  If history is any guide, I usually pre-order a bunch of cars for Mantleburg and for Christmas gifts for my nephews in the Spring and Trainworld starts to get them in around Thanksgiving.  They ship them as soon as they come in, so we should have most of them ahead of the holiday train season.

The first car up is this Poultry Sounds Dispatch Sweep Car (6-83251) that you see above.  Based on what I see on Trainworld, this isn't a new item, but is being promoted in the 2018 catalog.  They have this item listed as available right now and $18 under the Lionel list price.  (Side note:  they also have this Chicago and Northwestern non-operating version, too!)

The description talks about how the "chicken drover sweeps the deck" in the catalog.  But, I'm pretty sure it is supposed to read the "chicken driver"?  Check out this image from Trainworld that shows the door open with a guy with a broom coming out and the operating mechanism on the bottom of the car:
I've been resisting adding any sort of boxcars to Mantleburg and giving them to any of the boys because EVERYONE has enough boxcars if they have one.  But this one is an operating one, so it is kinda cute.  Also, The King of the Ball Tossers bought this Thomas the Train chicken and egg train car set at the Christmas Train Show and the new Lionel one reminds me of it: 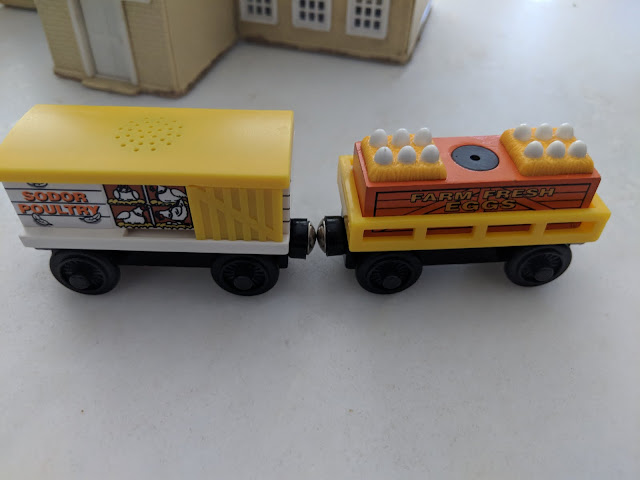