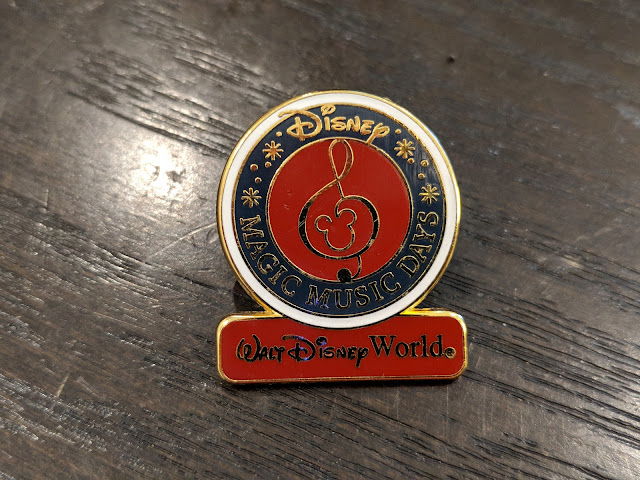 Yesterday, I posted two Disney pins (Pumba and Stitch) that we had acquired some time in the past 12 months and today is another pin from that same time frame.  I believe this one was traded by The Babe off of a cast member's lanyard, but I'm not certain of the exact vintage.  Looking around on the Dis Boards, it appears that there's some speculation that these "Magic Music Days" pins from Walt Disney World carry *some* value - to some folks, at least.

For us, I'll lump this one in with the Disney College Program pins that we traded for last Spring as pins that were given out to participants of an activity to only end up being traded for by my kids.

It is natural to wonder if these all (the Magic Music Days pin above and the College Program pins linked above) are scrappers, right?  I mean...why would anyone dump those pins for something that you can find on a cast member's lanyard?  But, I know from scrappers.  Or at least, I think I have a pretty good 'nose' for a scrapper.  Based on feeling the edges, looking at the enamel on the front, checking the back for bad/unfinished Mickey heads, poor/hard-to-read writing on the back and even how [Disney] is printed on the rubber pin back.  And...this one above (and the College Program ones), don't bear any of the normal marks of being a scrapper.  This Magic Music Days pin is now on the kids board - which has been filled up for some time.  Looks like we're in the market for another large-scale cork board.  'Tis the season for garage sales, so the timing is right for trying to find a cheap, second-hand cork board.
disney disney music disney pins disneyworld pin trading pins walt disney world wdw