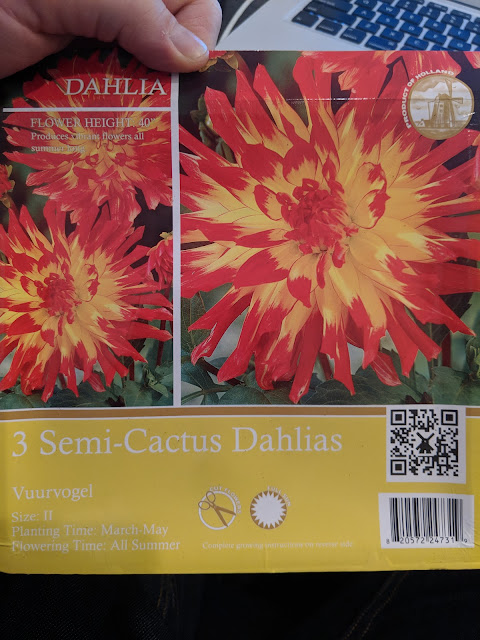 Yesterday, I posted a photo of some "Night Queen" Dahlias that I picked up and planted indoors recently.  Today, I'm sharing a photo of another set of 3 Dahlia tubers that came home with us, too.  This one is called "Vuurvogel" or Firebird Semi-cactus Dahlia. And while the "Night Queen" flowers are small (< 4"), these are much larger (~11") and have petals that are shaped quite differently.  Hence the whole "semi-cactus" thing.

What's a semi-cactus dahlia?  Glad you asked.  I asked the same question myself.  And found this answer from Gardeners World:


Some of the most spectacular dahlias are cactus and semi-cactus types. With their spiky blooms, they can trace their lineage back to a single surviving plant grown from a crate of tubers imported into the Netherlands in 1872.

Cactus and semi-cactus dahlias are some of the most eye-catching dahlias you can grow. Their star-like form means they stand up well to inclement weather, because they’re less prone to being weighed down by heavy rain than other dahlia types. They also need less staking than other varieties, which tend to have dense, heavy heads of petals. They also make excellent cut flowers.

These, too, are going in a pot that I intend to get started indoors ahead of moving it outside in April for the balance of Spring and the summer.
bulbs container gardening dahlias flowers patio gardening pots potted plants spring flowers spring planting tubers