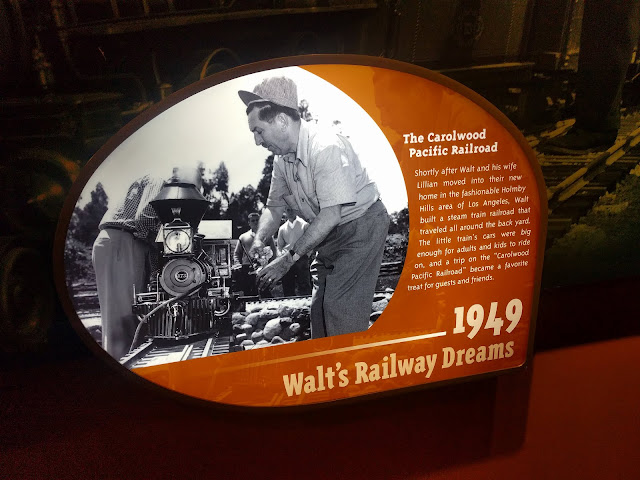 I've written about the Carolwood Pacific Railroad twice before on the blog here.  First, was in 2016 when we stayed at the Wilderness Lodge Villas - which has a Carolwood Pacific Room adjacent to the lobby.  In the room, there's a bunch of Carolwood Pacific stuff, but the centerpiece is pair of actual cars that came from rolling stock.  Then in December, I posted a photograph from that same room that showed Walt himself operating the locomotive (Steam!) with a few folks on board the Carolwood Pacific.

This post features a photo that I took inside of One Man's Dream at Hollywood Studios.  The description accompanying the photo of Walt oiling the steam locomotive metions that that their home was in HOlmby Hills.  Here's a Curbed LA post about the property (which, I think has a house that was built in 2001 and NOT the home that Walt lived in.  But...does mention the Carolwood Pacific).

I've been fascinated by model trains (thanks, Dad!) and - as you guys know - even run a Christmas train with my kids called the Mantleburg Line.  That's O Gauge and runs on a 8x4ish setup.  This is a totally different and the Carolwood Pacific was 7 and 1/4" gauge.  Unfortunately, as you can read in that Wikipedia post, it doesn't appear that I'll ever own and run a backyard railroad.


Most 7 1⁄4 in (184 mm) gauge railways are owned by clubs because of the relatively high price of the equipment required to run the railway. However, some items such as locomotives can be privately owned.

A guy can dream, right?  And I'll be keeping my eyes on Craigslist to see if something ever comes up.
backyard trains Carolwood Pacific disney trains hollywood studios model trains trains walt disney wdw