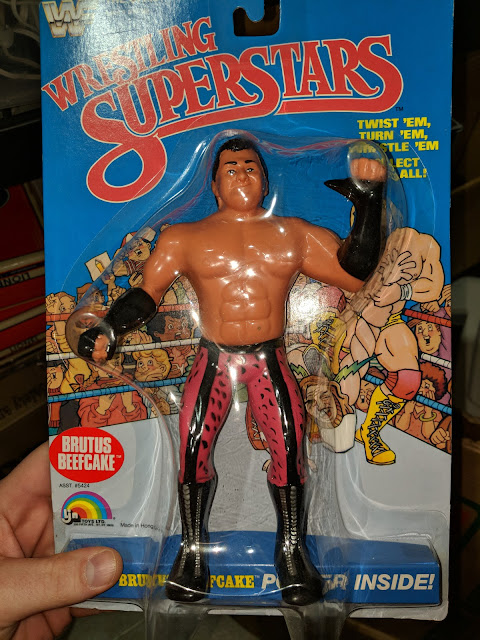 That title is full of a bunch of jargon - when it comes to collecting action figures.  The "MOC" means "Mint on Card" and that's the way I'd describe this WWF Wrestling Superstar Brutus "The Barber" Beefcake.  But, why am I posting this?  Welp, it is because that Brutus, along with a more than dozen of his brethren are down in my basement.  All in boxes and still mint in their packaging/on their cards - unlike the set of wrestlers that I played with like this Nikoli Volkoff that I posted a few years back.

There are stories about kids in the early 80's going hog wild on their Star Wars figures from Kenner.  I mean...there's even that documentary series on Netflix all about the toys.  But, I was born in 1978, so I was too young for the early Star Wars stuff.  But, I wasn't too young for the 80's-version of GI Joes.  And I loved them.  But, they aren't my 'toy touchstone' when it comes to my youth.  Nope.  It was these guys.  The Wrestlers of the WWF.  I spent more time playing with all of these guys than any other toy.  There's a whole page here describing the "Wrestling Superstars" on Wikipedia that you can check out for more information on them, if you're not familiar with them.

But, how did I get these and how many do I have?  I'm not sure how many.  I'll go through a photograph them in a bit, but I do know how I got them:  back in the early aughts, when I was selling drywall screws at Compass International with the Cactus, I was living at home.  And I was flush with my drywall screw money.  So, in addition to gas-ing up my 1994 Toyota Camry (brown) to head down to Lakeview to goof around with the city folk, I was trolling eBay and trying to find some of my youth in these "mint on card" LJN WWF Wrestlers.  And I bought a lot of them.  Retirement planning, right?  Not by a long shot.

But, what to do with them now?  There's a peak in terms of the value of collectible items (are these even collectible?!?) that peaks with the generation who covets them and their ascending age.  Then, things crash.  Think about the Model T car.  When I was growing up, my Dad was part of the Frankfort Car Club.  And in the Club there were a bunch of Model T and Model A guys.  That's because that's what they grew up with when they were kids.  Today?  You don't see many of them any more at shows.  Those guys died.  And they were the ones who wanted those cars.

Same with these wrasslers.  Do I go on eBay now and try to sell them?  They've increased in value, but, I suspect they will continue to do so for the next dozen or so years.  That's because guys my age - who want to connect to their childhood - will continue to make more money over the next few decades.  Then, we'll start shedding stuff and nobody will want these weird wrasslers.   Over the next few weeks as I get my shop in order, I'll try to photograph all of the guys in their packages - at the very least to document them, but maybe for use on their online listings.

Maybe I need to think about my collecting mantra and let a few of these go.
1980's childhood collecting collections my collecting treasures mantra when I was a kid wrasslers wrestling wwf