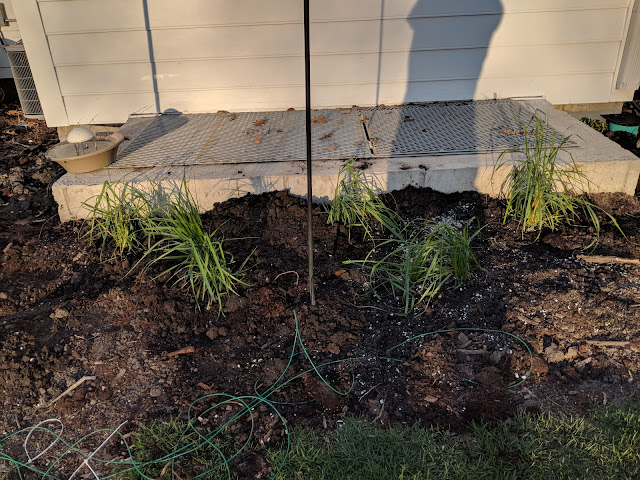 Over the weekend, I started to plant the first few pieces of our backyard landscape plan - starting with the rear foundation plantings.  I posted the landscape plan for this area back in October of last year that shows a series of hostas, grasses and boxwoods.  The central area - right underneath our bird feeders - called for five staggered grasses.  Karl Foerster Reed Grasses to be precise.

So, when I came across them at Home Depot, I grabbed up six of them.   Six.  Yeah...because I didn't have the plan in front of me and I thought it called for six.  Turns out, the plan calls for five of them here, but five more in a different spot.   Thus, I ended up planting just one of that other set of five, but will get the other four later this Spring.  The photo you see above shows where I put them in the bed.  That green wire laying around is for our Automower.  His dock is right in front of this bed and that is the excess boundary wire and the lead wire that terminate at the dock.  The grasses are staggered with three in the back and two in the front.  This is right outside of our kitchen nook window, so until they get tall enough, you won't really see these from inside unless you lean over and look for them.  From the patio, though, they definitely make that area feel a little bit more 'done'.  And with a family party coming up soon, having at least one area looking 'done' is a good thing.  There's just so much more space that needs work.  But at least this little section is 'done'.  For now, at least. 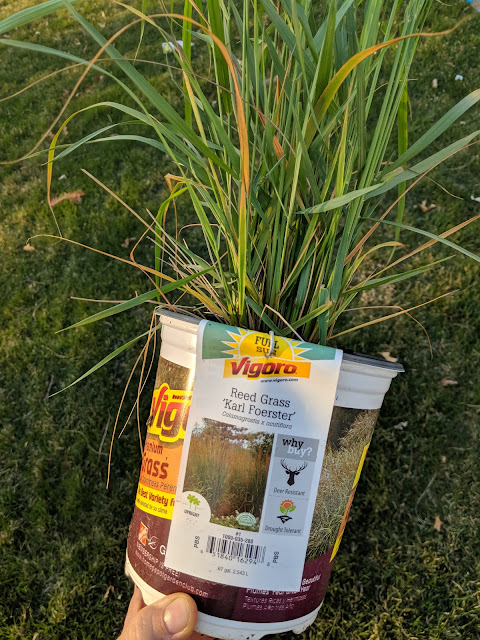 We have a set of these Reed Grasses out front and they gave us some 'winter interest' even in their first year, so I'm hopeful that these will get established this Spring and stay in good shape.  They're located pretty close to the hose bib, so I'm thinking that they'll get plenty of water.  However, there was a set of grasses that I planted late last year - These ones from Costco - that don't appear to have made it over the winter.  They went in late, didn't get a ton of attention from me, and as a result, haven't pushed up any green shoots yet.  Now, that doesn't totally mean they're gone.  But, based on the other grasses in our front landscape, which are already like six inches tall, the Costco ones are dead.

I'll end up waiting another week or two, then yank them out.  I already called Costco and they said that if I bring them in, they can't replace them (they don't sell them right now), but that they'd refund the money.  But, that whole Costco Christmas Tree return story that went viral has me already thinking about how I'd bring them back in.  (Black garbage bag, inside of a box, so nobody can really see that I'm returning plants and accuse me of returning something like that lady with the X-Mas tree, right???)

The good news is that I planted those BEFORE we had the full landscape plan done.  And where I put them is now where three Canadian Hemlock trees are slated to go, so it all kinda ends up working out.  Kinda.
#newoldbackyard #OnGrandGardens backyard foundation beds fountain grasses gardening grasses landscape landscape beds landscape design landscape plan landscaping new old backyard on grand gardens
Location: Downers Grove, IL, USA