Posted by Jake Parrillo on June 24, 2018
On a recent trip to Menards, I was in the garden center and was drawn to their fountain setup.  They have a dozen or so fountain ranging from formal tiered fountains to desktop versions.  Some of them are terribly cheesy but others seem ok to me.  But, there are two things that seem to bind them all together:  they're made of fiberglass.  And they're cheap.  Well, relatively cheap.

I've had a fiberglass fountain before at our old house in Elmhurst and I really liked it.  Some of the time.  It was a three tiered traditional fountain with a pineapple on top.  A few things I came to appreciate:

1.  The bowls weren't very deep.  So that meant that I had to constantly (like every other day) fill it with the hose.
2.  The birds loved it.  But they made it SUPER dirty.
3.  It didn't last 2 seasons because I left it out over the winter and it suffered some freezing cracks and was rendered worthless.

Thus, despite having an itchy purchase finger, I passed on them.  I actually don't really even know where I would put a fountain, let alone get power to it.

I came home and told Nat about my experience at Menards with their fountains and she mentioned that Wannemakers has quite a selection.  So, off I went!

And sure enough...they *do* have plenty of fountains.  All of them are nicely put together and are made of concrete.  But, none of the ones on hand were what I'm after.  After inquiring about the inventory, I was pointed to a few binders that showed a series of special order fountains that they can get for you - if you so desire.

Here's a few in the catalog that I was drawn to.

1.  23" tall, 30" wide Two Tier Bella Fountain.  Sits low to the ground, but has a generous-sized bowl so we wouldn't have to constantly fill. 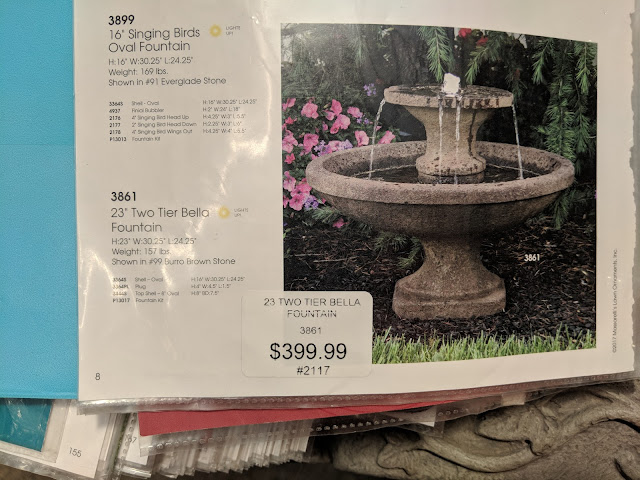 2.  53" tall, 38" wide and 21" bowl depth Two Tier Lady of the Arbor Fountain.  I have recently come across Hebe fountains that I've become interested in.  While this isn't Hebe, it is the kind of the idea of what I would want in my Hebe fountain.   Those of you who know your mythology may know that Hebe was the goddess of youth.  So...get it? Fountain + goddess of youth = fountain of youth?!? 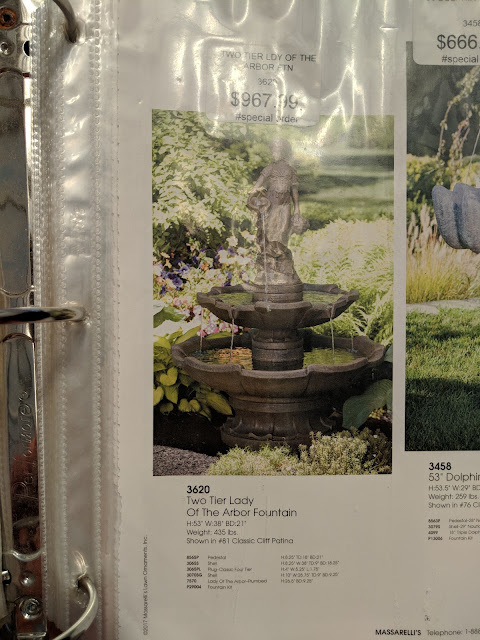 I also was struck by this series of 'garden fountains' that all have bowls set right on the ground.  I hadn't previously considered a garden fountain before, but I think I might have come around.

3.  This 32" x 38" deep garden Catalina Fountain is fairly simple, but feels like it would work with our house style. 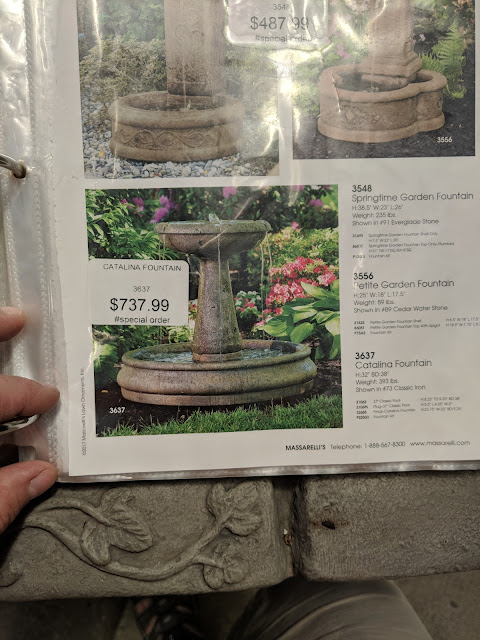 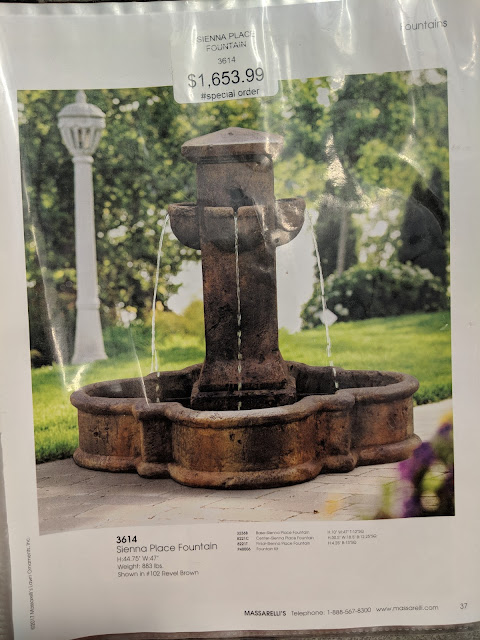 While I like plenty of things about each of them, I still can't kick the idea of a Hebe fountain like this one.  I have a feeling that Nat won't love it - but she won't love *any* fountain.
backyard dreaming fountain wannemakers