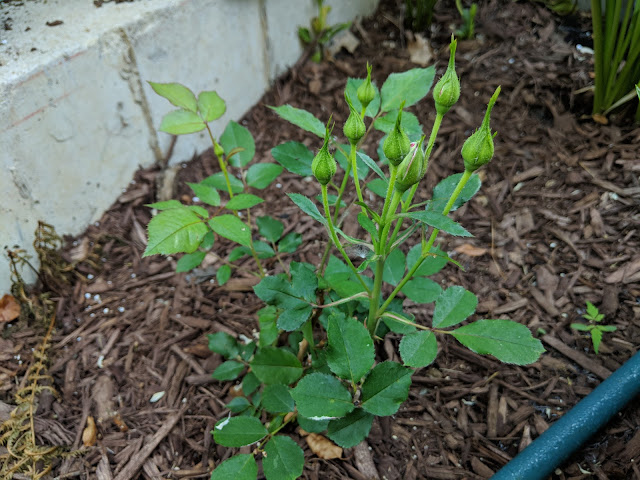 Late last Summer/early last Fall, Nat's Mom gifted us three plants: an Everlasting Revolution Hydrangea, a Tuff Stuff Red Hydrangea and a Disneyland Rose.  I planted the two Hydrangeas along the south fence line where the plan called for them, but I stuck the rose in the rear foundation beds outside of our kitchen windows.  It is located right in between where I planted the teardown Hostas last Fall and the Karl Foerster Grasses that I planted this Spring.

What you see in the photo above is the Disneyland Rose - that has not only survived the winter, but is about to burst with it's first flowers.  What good news to see this thing flourishing in our first Summer here.  Those pointy buds are really quite cool, aren't they?

Those of you who aren't familiar with the Disneyland Rose, check out this post I wrote when we acquired the plant.

Nat has expressed an interest in more roses, but our plan is really light on them, so we'll have to figure out how to add them in to a few places/swap them in for other plants.   We've talked about a cutting garden of sorts, so maybe the right answer is to move this to a spot where we can locate it along with other cut flowers?  Or maybe the answer is to just buy *more* of these from Jackson and Perkins.