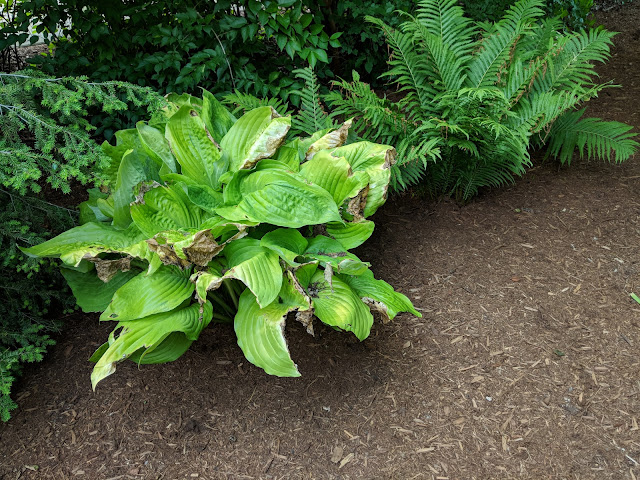 The last time I covered our fern and hosta(s) that have been fostered by Nat's Mom in her garden out in Naperville was October of 2017 when the hosta had ridden out the hot summer and the fern had died back for the year.  That post is here.

The photo above is one I took recently when we took a trip to Naperville.  You can see that both the hosta and the fern are HUGE.  They've been there for two full growing seasons - and this is their third.   The hosta again has some tip burn, which is disappointing, but it does get some decent sun due to the Bald Cypress that is located close leafs out later than most trees.

The size of those two are the good news.  The bad news?  The tiny Hosta Venusta that I planted back in 2016 doesn't look like it survived this harsh winter.

According to this post, one of the best times (besides early Spring) to transplant hostas is early fall - so I'll look to taking this one in September or so.

My experience with transplanting Ostrich Ferns is that they will just about survive anytime, but I'll have to get to this one before it dies back for the year.

The question of where, exactly, to put these is a whole different thing.  We had the large Hosta in our front yard in Elmhurst, but based on the current landscape plan, I'm not sure it fits perfectly in any spot.  The side of our house (south side) is super sunny, so that's out.  The north side is going to be under construction with pavers next year, so I'm thinking that is out, too.  I'd prefer to NOT have to move it again, so wherever I decide to put it, I'm hoping that will be its final resting spot - at least for a while.