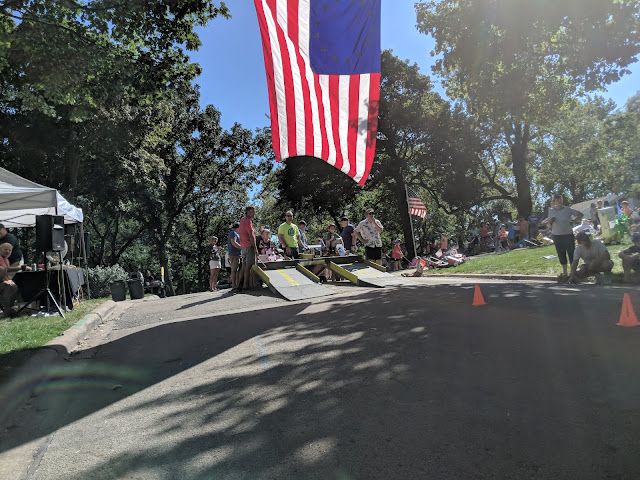 On a recent Saturday, we took the three kids down a couple of blocks to Fairmount Avenue to the annual neighborhood Block Party and Soapbox Derby.1   This is the second year in a row that we've participated and you can see a video and my post from the 2017 edition here on the blog. 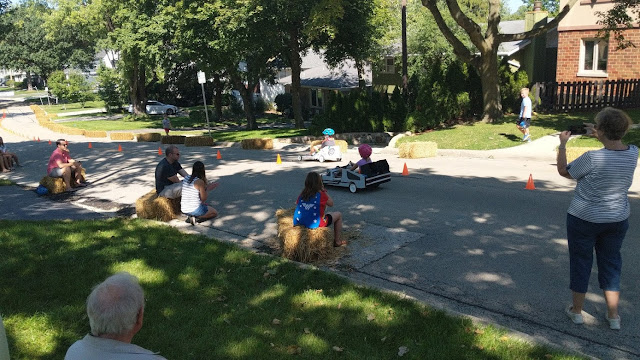 As I wrote last year, this is a really fun family event.  The families that put this on go out of their way to make their block party a really special experience and they draw in families from not just their block, but from people like us - who live a few blocks away.  Once again, they had a DJ tent set up, a really well-put-together starting gate/ramp, a big food spread including hot dogs, a frosty keg and lemonade/water setups for all the kids (and shandy setup by combining the keg and lemonade setups for me!), a snow cone station, a number of sawhorses set up by the garage to tune up your car and every tool and wrench and impact driver you could ever need.  Oh, and they invited Guac and Tacos from Downtown Downers Grove2  to serve food, too.  Nice touch!  They register cars and drivers and lined Fairmount Street down the hill with hay bales all the way from the start to the finish line.

They pull a checkered "Finish" Sign across the street so the kids love racing towards the end, but this year, they also added a really sweet, and All-American touch with a HUGE American Flag draped across the street.  They used a rope and strung it up between a couple of mature trees.  You can see the flat - a 13 star version - in the top photo above.

The track is steep enough to allow some cars to get up some speed, but also not terribly inclined to make the cars run out of control.

Here's the highlight video of what I captured at this year's running of the Soap Box Derby:


Here's a map that shows the track.  It starts in the middle of Fairmount - at the peak of the hill - and runs down the hill towards Randall Street.

There were a number of really creative cars with most of them using the standard Soap Box Derby chassis/steering/wheel system from the guy up in Canada called GoKit.com.  They don't go terribly fast.   I think the most creative this year was the Delorean.  Yeah!  From BTTF.

There were also a few cars from the SoapBoxDerby.org folks - with the larger wheels.  Those ones FLEW down the hill.  There was a Hawaiian car - with a lei and a hula skirt wrapped around the body that was BY FAR the fastest car.  The kid who was driving it was knowledgeable enough to understand how to stop his car using his brake and not to over steer.  *That* (oversteering!) is the main problem that most kids get into.  They oversteer and then the car starts to rack left-to-right.  They they oversteer back.  And the car racks real quickly right-to-left.  And they stop moving forward and skew sideways.  Seems like the older kids have a little more touch.

My three kids didn't all run down the hill.  That's because we don't have our own car.

Why don't we have our own car?  Because I ran out of time.  Shame on Dad.  Last year, after the Derby, I went out and bought a kit from the GoKit guy.    I put it on my workbench in the basement last Fall.  And there it still sits.

Next year?  We'll have our own car!

But this year, we borrowed a car.  And two of my kids went in it. 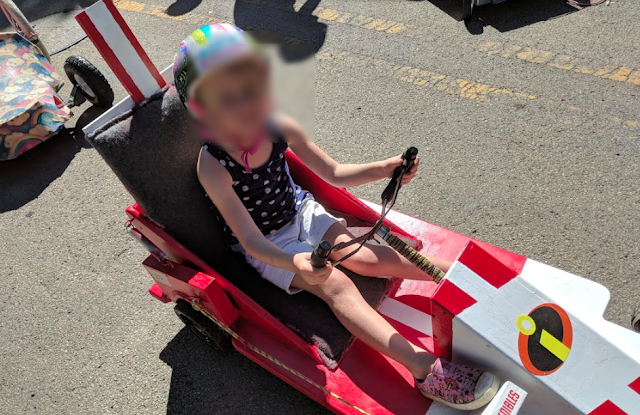 And Here's the King of the Ball Tossers in the same car.  Thanks to the Paul's for letting us give the car a run. And it wouldn't be a proper block party without the Fire Truck showing up, right?  The firemen from the Downers Grove Fire Department were terrific and brought out an engine for the kids to climb up on and in.  They were patient, stayed a while and even answered a bunch of questions about their rig.  We're fortunate to have such professionals looking after our safety in Downers Grove.  Thanks to them for their work and service to our community.

Here's the boy in on front of the Engine. 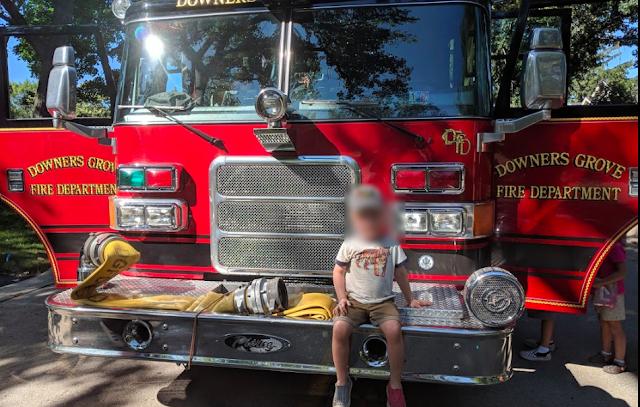 There's no question in my mind:   this is the best block party not just in Downers Grove, but in the suburbs.  Kudos to the families that put it on.  We'll be back next year to celebrate together.  This time, with a car!