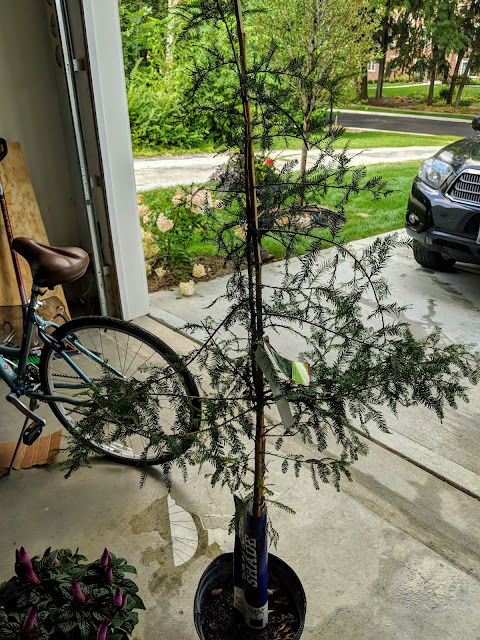 Recently, we made a stop at the Home Depot to pick up some painting supplies for a project and I, as I usually do, wandered out to the garden center.  There....I was confronted with a bunch of small fall-planting-ready trees.  Most of them were fruit trees, but mixed in on the pallets were a few shade trees.  But there was one small tree that caught my eye:  a small (less than 1" caliper) Bald Cypress.

Priced at $19, I had a hard time passing it up.  That's it in the photo above and you can see that it is small and...dare I say....scrawny.    But at $19, it isn't all that much different than the Dawn Redwood that I planted as a replacement earlier this Summer.

Nat's folks have a couple of Bald Cypresses and there are a few down at Barth Pond (that we use to mark the water level of the pond!) and at Whittier School in our neighborhood.  Each time we walk by them or see them, I remark that I'd like to have one of those trees on Hornbeam Hill.

Unofficially, this marks the 26th tree that we're going to plant in our yard.  Yeah...26!  But, I'll claim this as officially #26 when I get around to putting it in the ground.  Check out the label below and you'll note that it calls for 'Full Sun'.  Hmmm...where to put it? 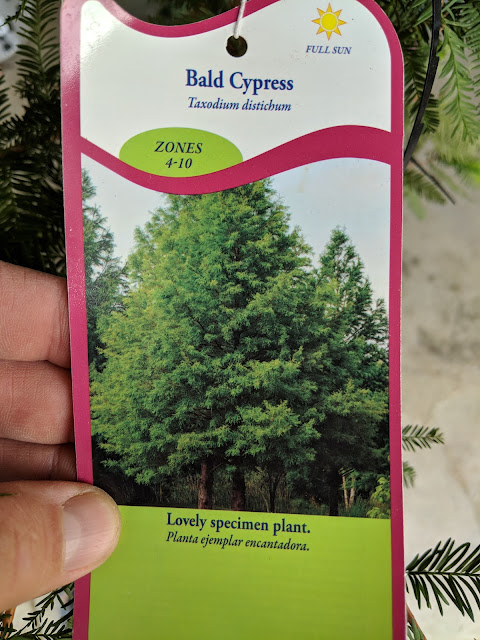 My initial instinct was to put it in the backyard, but now I'm reconsidering and thinking that it might be awesome to plant in the front?  North of the driveway, in line with the dying (drowning??) Chanticleer Pear tree that we've already replaced once - and are likely going to have to replace again next year?  I haven't shown this part of the landscape plan before - mostly because there is exactly NOTHING on it.  But, now I'm wondering if this is a good spot to plant this tree? 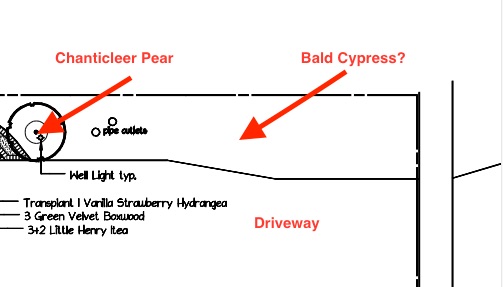 It would kind of 'frame' that side of the driveway and serve as a screen of sorts as people drive north on our block to the house north of us and similarly, would screen a direct view of our house from drivers coming south on the block.  The plan (above) doesn't show a large tree that is just west of the sidewalk, right on the property line, so I would plant this Bald Cypress right in between the Pear and that large, mature tree.

Of note, one of our surface drains for the downspouts on the north side of the house pop-up close to the location I've pointed to as a possible location.  Knowing that Bald Cypress trees really like water and can tolerate wet settings, it seems like it might be a match made in landscaping heaven?  Of course, we totally have room in the back, but knowing this tree is small and going to take many years to get to size, it might be fun to plant something else in the front.  And this might help force some other design decisions in the front - like how we extend our landscaping forward from the house.
#hornbeamhill arboretum Bald Cypress deciduous conifers driveway front yard front yard landscaping garden diary gardening hornbeam hill landscape trees