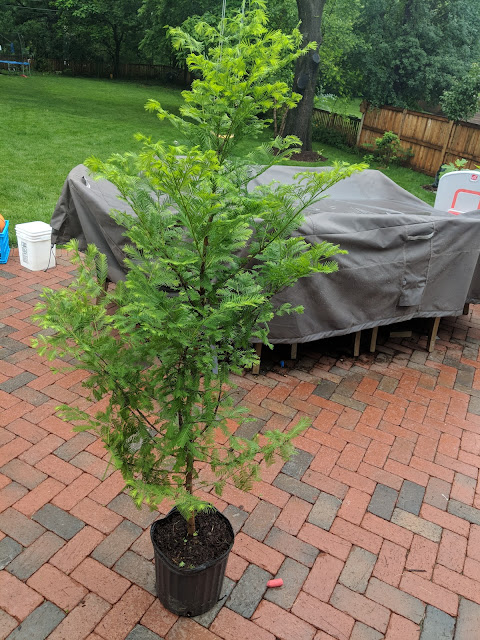 Last year, in May of 2017, I first posted about the Dawn Redwood that we had bought on a whim from Menards.  It was destined to go into our backyard in Downers Grove and we ended up planting it on Earth Day with some help from the three kids.  I love this photo that Nat took of us and was reminded of it recently when my Mother-in-Law made me a framed version for my desk.  Almost one year ago exactly - on July 6th - I posted a 'two month-in update' of the tree that showed it green and mostly happy.

Everything looked good.  But, we had just moved in and the backyard wasn't a priority.  And my watering - it appears - seemed to drop off.  Because we lost the tree.  At least, I know that now.

Up until October of last fall, I wasn't sure.  I posted this piece asking if the Dawn Redwood was going to make it.  It had set some buds, but it wasn't looking good.

I will admit that I limb'd up the redwood in an attempt to get it to focus on some of it's upper extremities, but that might have been catostrophrophic. Couple that over-aggressive-pruning with the lack of water during July, August, September and I think the little, young Redwood just couldn't make it.  Lesson learned, folks:  resist the to prune your trees until well after they are established.  (case in point....I see some low limbs - almost 'suckers' - on our Frans Fontain European Hornbeams, but I'm NOT going to touch them this year.  Put.the.loppers.down.Jake!)

I was just going to let the dead Redwood kind of rot out there and hope, maybe that the rootball would send up a shoot or two and - who knows - maybe we'd play the long game and get a tree.

But, then that Father's Day gift from Nat's Mom - featuring the kids and that tree.

It just about moved me to go find another one of those trees.  And I did!  You can see it in the photo above.  It is (about) the same size as V1, but from a different supplier.  I bought this one from "Fast Growing Trees" and it came looking nice and green.

What happens next is that I get the three kids out in their garden gear along with Natalie and we try to take another photo.  Why?  Because I want to remember planting *this* tree with them like I do with the one that died!

The last tree that we added to Hornbeam Hill was the small Canadian Hemlock.  That was officially listed as tree #24.  That list of 24 included #22 - a replacement Chanticleer Pear Tree.  Because I counted that replacement as a tree on the list, I supposed I should count this one too.  This *will be* #25, but let's wait until I plant it in the ground first before it makes the list below, right?

1. Flowering Pear in backyard on north side.
2. Flowering Pear in front yard by garage. (LOST and replaced)
3. Japanese flowering cherry
4 and 5: 2 Lindens that I espalier'd
6. A Dawn Redwood from Earth Day 2017 (LOST and replaced)
7. Nat's Saucer Magnolia in our front yard
8. A Corkscrew Willow all the way in the back (LOST)
9. A Crimson King Norway Maple near the trampoline
10. Another flowering pear from Earth Day 2018
11. Red Maple Sun Valley tree from Earth Day 2018.
12. Weeping Cedar tree - our first evergreen.
13. The weeping flowering cherry tree that the Babe planted for Earth Day 2018.
14, 15, 16, 17, 18, 19, 20, 21. These Frans Fontaine Hornbeams.
22. A replacement Chanticleer Pear tree (3" caliper) out front by our garage
23. Our second evergreen - a short Fraser Fir Christmas Tree out by the trampoline
24. This Canadian Hemlock that is the first of nine that our landscape plan calls for in the backyard
25.  This soon-to-be-planted Dawn Redwood replacement.
arboretum backyard Dawn Redwood deciduous conifers fast growing trees garden diary hornbeam hill trees
Location: Downers Grove, IL, USA