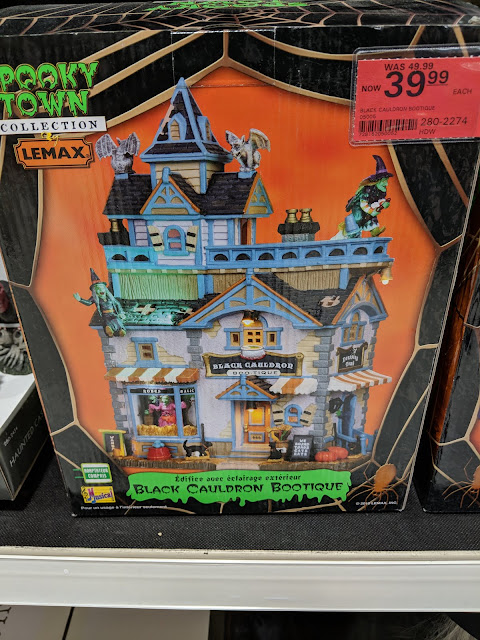 Yesterday, I posted a photo of the three kids at the Bolingbrook Menards taking in the Lemax Spooky Town display.  As part of that display, I picked out a few structures that I'll post over the coming days here on the blog.  I started this tradition of posting photos of Spooky Town structures all the way back in 2012 when I posted this photo of this Tombstone Quarry.  In 2016, I did three posts on Spooky Town Lemax buildings and same in 2017.  The full archive of Spooky Town posts can be found here.

This year, the display is noticeably small - at least at the Bolingbrook Menards and has this white sign that says "Halloween Village" on top of it.  There are a few animated structures and some neat little people.  I'll post some images and details of some of the buildings in the coming days.  But, today, we'll start with this one above:  the Black Cauldron Bootique.  You'll notice that it is *already* on sale at $10 off the normal price.  That - at least to me - indicates that they're trying to move this building early in the season.  Maybe to make room for more?  The product listing on the Lemax site says that this was released in 2010.  So...it *is* old!  And not animated.  In fact, the listing doesn't even show details of the building with any description.

Those of you who have read about Mantleburg Village over the years will be interested to know that after many years of growth an annexation, the Mayor and Village Board have decided to reverse course and have begun the process of de-annexation.  Mostly with the currently owned/occupied Christmas Village buildings in Mantleburg, but that also means that any Halloween buildings certainly are not in the cards.  More to come on Mantleburg's future, but for now, it appears that new zoning ordinances in draft may allow for Lego-built structures in lieu of these pre-built Lemax and Dept 56 versions.