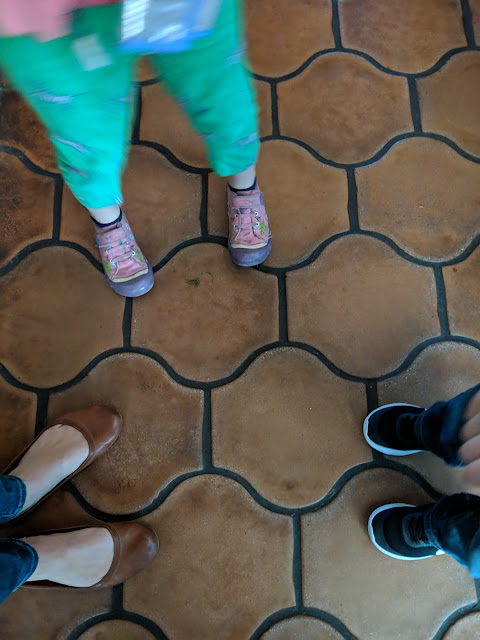 Over the years, I've posted a few times on tilework done at Disney Parks.  It has been a source of inspiration and admiration both for us as we built our house and how we observe the world.

First, I covered the tilework in the Peter Pan queue in Fantasyland at Walt Disney World.  Then, I came across the tile in PizzaRizzo at Disney's Hollywood Studios.  Both served as inspiration for our vestibule tile work that we eventually incorporated into the house.

Today's post shows some tile that is the Ariel ride at Disney's California Adventure.  Turns out, this is, I think, called the San Felipe style of tile.

Think about the beating this tile is taking at Disney California Adventure.  Hundreds of thousands of people are walking across this every month.  And it looks great.

As we are beginning to think about our basement build-out, tile is something to think about and this struck some part of inspiration in me.  Now....we all know that I'm out of the committee that decides design items in our house, but it still will be something that I'll bring up when we're making picks.