A Trip To Morimae Ginza Bonsai Shop In Tokyo 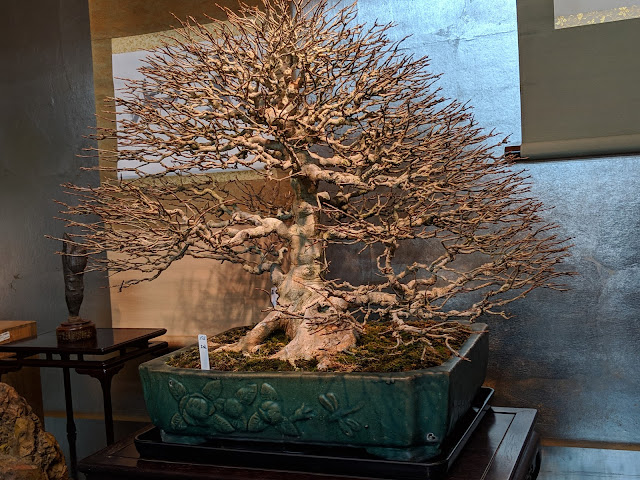 As I've mentioned in a few different posts in the past month or so, I've been increasingly drawn into bonsai videos on YouTube.  Thanks to their recommendation algorithm, I've been wandering into a bonsai rabbit hole and have, I think, come to the conclusion that I should try my hand at some form of bonsai.  So, on my recent trip to Tokyo, I decided to seek out some bonsai in person.  I came across this post on Bonsai Empire that recommended this small shop called Morimae Bonsai in Ginza that was just a few blocks away from my hotel.  That story mentioned that the store was small and recommended a trip upstairs.

I wandered over there and found the place and I went in.  It *was* small and had one person working in the place behind a counter.  The Bonsai Empire piece mentioned an upstairs, but I didn't notice any stairs, so I was stuck just looking around the little shop.  They had about a half dozen trees in the store and some tools.

Much of the bonsai that I've been looking at is of the conifer variety, but this deciduous tree (could it be a maple?) really shows me that those trees shine the brightest in the winter when they lose all their leaves.  Makes me pause on what the right entry point is for my journey into Bonsai.

But the other trees that the Morimae Ginza Bonsai Shop have include some conifers.  Like this beautiful specimen that is in their front window.  Think it might be a Juniper - which is a very common Bonsai tree: 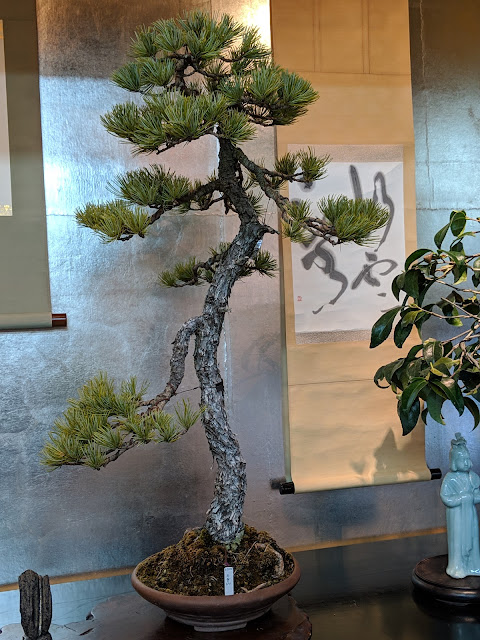 This one has a price tag that is more clearly read and understood:  65K Yen.  That's around $600, which makes this one a bit more reasonable.

When I went to the shop, I was thinking that it wasn't going to be an actual tree that I was going to potentially come home with, but rather some Bonsai tools.

The folks at Morimae Ginza Bonsai do, indeed, have some tools for sale.  They have individual scissors and splitters, cutters, pliers, clippers and tools that you can buy.  Those were between $30 and $100 USD it seemed.

They are promoting an entire set that you can see below.  Includes a couple of pair of scissors, a bunch of brushes, a root rake, some snips/pliers of various shape and variety and purpose  (including concave cutters, which I understand are the most important ones) and a stone for sharpening.  They were asking $30240 Yen.  That's a little under $300 for the set - which on the face of things isn't too terribly bad.  They are clearly marked as "made in Japan" and I would think that they're very high quality. 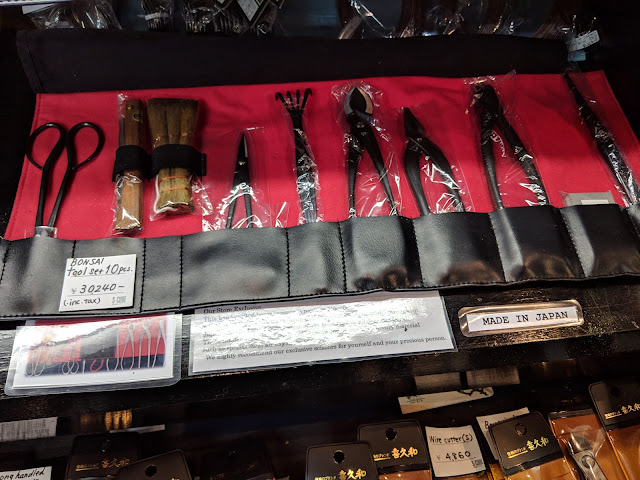 A closeup of the signage that is English says that this set is a "Store Exclusive".

"This hand-crafted bonsai scissor is made in Niigata" - which is home to great blacksmiths. 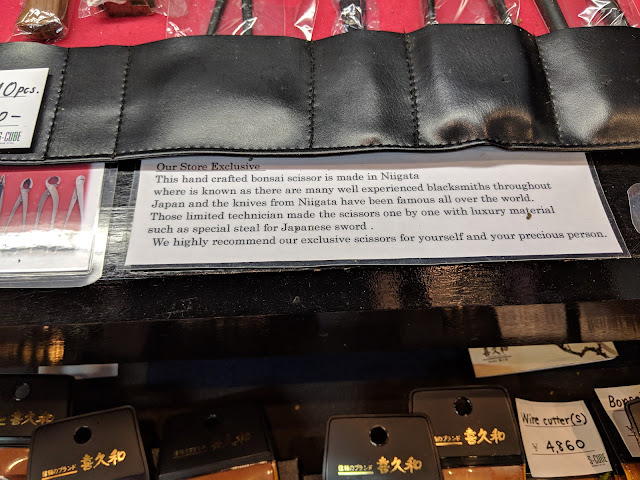 That $300 price tag was a bit too much for me but is totally reasonable for those looking for a set of Bonsai tools.  Here's some comparisons that may or may not be made in Japan.

I'm thinking that once (or *if*) I get started with a tree, I can start with some entry-level tools and eventually see if the craft sticks and then think about upgrading to something like this.

This is the third in a series of posts about trees in Tokyo.  The first was this look at columnar trees on the streets of Tokyo, then this beautiful bonsai-ish tree outside of the Peninsula Hotel and now this set of Bonsai trees.
bonsai garden inspiration garden tools gardening tools Ginza shopping tokyo trees
Location: 7 Chome-9-10 Ginza, Chūō-ku, Tōkyō-to 104-0061, Japan