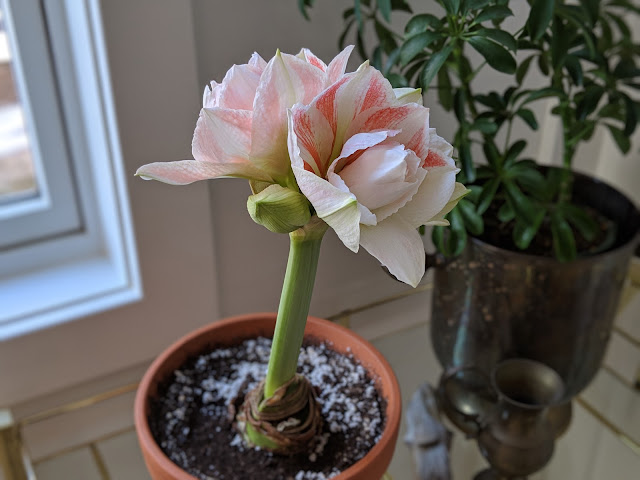 It is March and we're still getting this big, beautiful bloom of double flowers from our Amaryllis bulb.  I planted this in the last week of November of 2018.   One week in, it showed no promise.  By the end of 2018, it still had not opened.  So, we missed our 'Christmas flower'.  Not the end of the world.  After giving it a constant drink of an alcohol mix, I was able to restrict it's height.  And it bloomed at the end of January.

Today, I'm sharing a photo of this second bloom.  The variety is called a "Double Flowering Nymph", but that notion of 'double flowering' has to do with the flowers in one bloom.  They have an inner and outer flower.  But for us?  We're getting a double, double flowering.  The second stalk is the first double.  The fact that they have rings of flowers is the second double.

We missed Christmas with our amaryllis bulb this year.  But, you know what?  Having something blooming in our house in January and now in late February/early March?  That's not so bad.
Amaryllis bulbs christmas flowers flowers winter bulbs