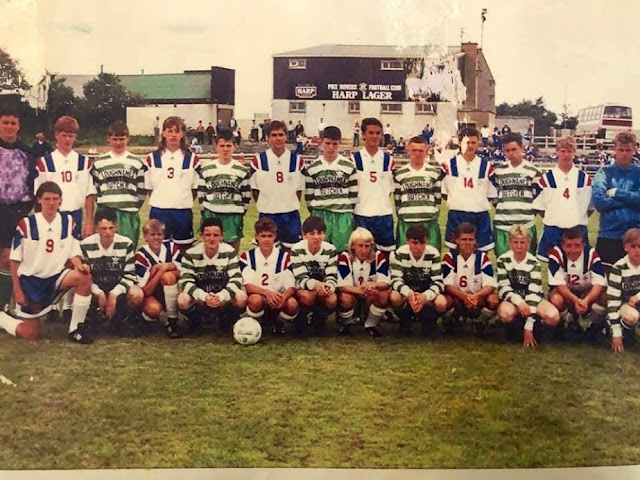 The last time I posted a #TBT photo of my youth soccer team it was the core group of guys that I played with for almost ten years.  Today's photo is of the same team, technically.  But it isn't all of the core boys.  There are some guys like Tom, Loran, John, Ted, Matt, Chris and Russ in here, but we supplemented with a few older/different guys from what I can best describe as a 'different soccer dimension'.  They were skilled players, but from a different club scene.

This photo is from either my seventh or eighth grade years, so I was 13 or 14 years old and I had the pouty teen thing down, right?

We're playing in Ireland in 1991 or 1992 and you can see the sign in the back reads Pike Rovers Football Club.  We were representing the USA in some fashion (not officially), but we were wearing French National jerseys because they were pretty close to what the US Men's National Team were wearing at the time - but the US ones had the colors only on one shoulder.

If I recall correctly, we got pounded in almost every game we played - like 6 games over 7 days.   It was a way more physical game that we were used to, not to mention we only brought 13 players, so we had just two subs when we were used to running guys in/out all the time.

This was my first time going overseas and I went without my parents.  It was quite a bit of fun and going with our team made it even better.  It only could have been even more memorable if more of those *core* guys came with, right??
#TBT lincoln-way soccer club soccer Throwback Thursday