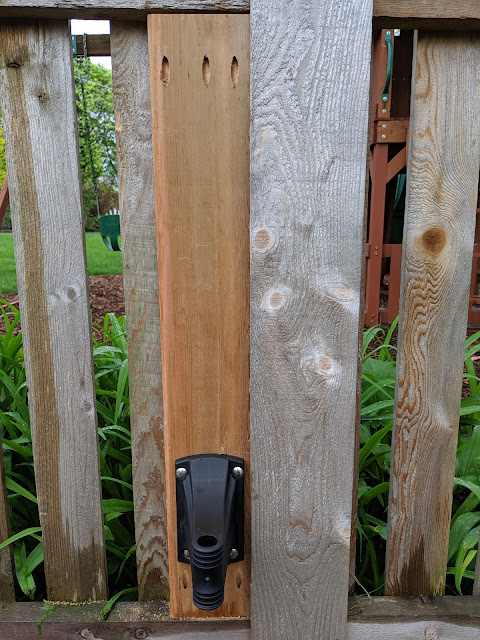 Back at the end of May, I posted about how I was trying to sort out my yard hydrant situation.  With our yard being so deep, I needed a way to get a hose about half-way back that would allow me to water everything in the rear part of the yard.  Last year, I solved that (kind-of) by burying a rubber hose underground from the house to a location about 100' or so from the rear boundary.  There, I stuck what is called a "Yard Hydrant" in the ground and called it a day.  That yard hydrant had a place to hold a big mess of hose and had a spigot that would allow me to turn on/off the water from that location.

The problem was that it didn't make using or storing the hose any easier.  And with the Automower in the backyard, I ended up having a sliced hose because I never got all of the hose off the grass.

Hence...why I posted about this project in the first place.   This project made it to my 2019 To-do addendum list, so we can begin to cross that off.

I have a nice retractable hose mounted in our garage and figured that I could kind of replicate that out in the yard.  It gave me the best of both worlds:  I could have a hose in the yard, but since it is self-retracting, I could easily get it out of the grass after every use.  Here's my post about the first one I bought for the garage.  My experience with that one has been nothing but positive.  So, I bought another one.

But, how to mount it?  I went thru a few different options in May.  Ended up with #3.  Mounting a 2x8 of cedar next to/behind the metal post.   You can see that 2x8 in the top photo.  I used the Kreg Pocket Screw jig and put in three pocket screws (exterior grade, of course) in the top and bottom of the 2x8 and fastened it to the existing cedar 2x4 rails.  I trimmed the 2x8 to kind of *fit behind* the metal flanges of the post to ensure that whatever pressure on the post was being carried by that metal flange.

I also considered the location height-wise of where to hang this thing.  Knowing a little bit of physics (and consulting with my dad), the answer was to hang it as low as possible to provide the maximum force as low as possible on the post.  With the bottom of the post being sunk 4' deep into concrete, the lower the hose is on the post, the less 'pulling' it is going to do.  I looked at where the hose reel in my garage was hanging and measured the details versus where I put *that* mounting bracket.  I needed more than 12" of clearance to ensure that when the hose was fully retracted, the very end (with the hand nozzle) wasn't going to drag on the ground.  But, I also tested for usability.  I ended up mounting it 16" from the ground because it was just a little bit easier to grab for me with that extra 4" of height.    Here (below) is a photo that shows the bracket vs. the ground level.   Also note, you an see the steel post peeking out underneath the piece of cedar that covers the post and you can kind of make out the flanges. 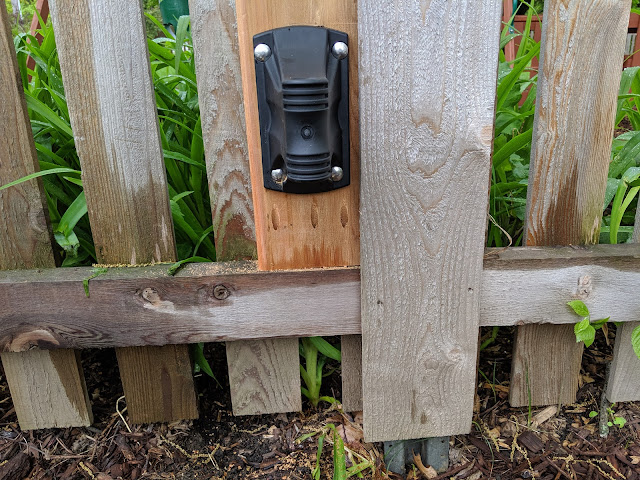 I also then grabbed some stainless steel carriage bolts.  The mounting bracket came with some  1/4" by 3" long lag bolts, but doing a test fit, I realized that I could beef these up a bit and went with a 5/16" carriage bolt that was 3.5" long.  You can see them in the photo below: 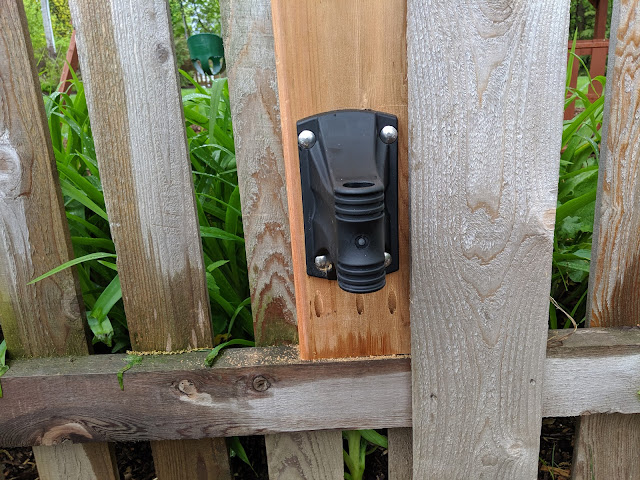 I also used some BIG fender washers on the backside of this.  Where I ended up drilling the holes for all four of these carriage bolts went through the fence pickets, too, so that's where the 3.5" length fit in.  Using the fender washers, I was able to connect this bracket *through* the 2x8 beam and *to* the fence pickets that are - themselves - attached to the runners.

And finally, here's a look - from the top - showing how the bracket is affixed.  The large hole allows for reel to slide onto this bracket easily.  And....importantly....slide off of the bracket when Winter comes. 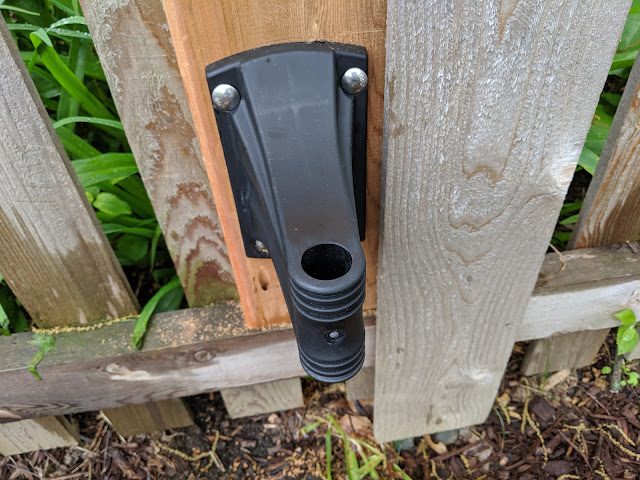