Cast (Non-Iron) Gnome For Our Garden? 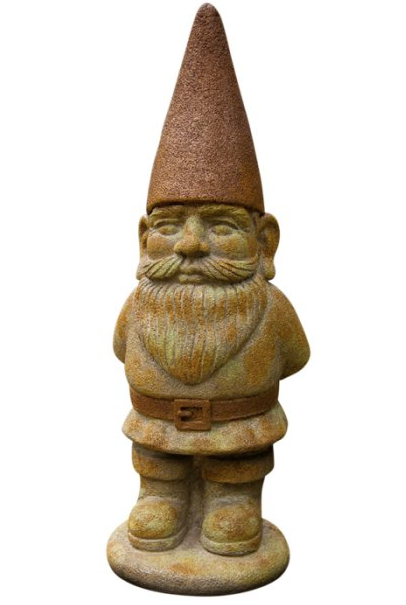 Every year, we attend something called "Fairy Fest" at the Growing Place in Naperville.  We build some Fairy garden stuff, have a little tea party, buy some tiny plants and then hang out with this guy in a gnome costume.  Or...a gnome.  He's pretty believable.

One of the things he tells the kids is that any garden with a gnome is going to be happier, healthier and wiser.  I kind of glommed on to that statement and have been pointing out the one gnome we have out back.  I don't think I've ever posted specifically *about* him, but I do have this photo (scroll down) in this post that shows off the current gnome that inhabits our backyard.  He doesn't have a name, but I've had him for close to ten years.  I think Nat bought him from Target and he's done a fine job making our backyard happier, healthier and wiser.   He's cast iron and has weathered being outside for those (almost) ten years and I really like him.

However, you know what is better than one gnome?  Two gnomes, of course.

And that lead me to looking online for other cast iron gnomes.  Far as I can tell, but there's no one making them new today.  There are a few on ebay, but the prices are outrageous.  I've been hunting at garage sales, estate sales and even flea markets.  But so far, I've not found one.  I did, however, find this beautiful cast iron urn on Craigslist last year and I've been looking for more.

And that's lead me to think about other materials including this charming fellow you see above.  He's from Henri Studio and his name is Ziggy.  I found him here at Hayneedle and he's $130.  The Henri Studio folks are the same people who make the fountains that I've been dreaming about (post here) and from what I've read online, make really nice garden stuff.

Ziggy is made of "Cast Stone", which I think is different than concrete and if they make their fountains out of it, I'm assuming it will stand up to the weather and winter just fine.

If you look at Ziggy's details, you'll see that he's 29" tall, which would make him about double the height of our current gnome (he needs a name, right???), so he'd stand out just fine.

But, of course, there's some fun in keeping up the hunt for a vintage cast iron gnome at the various sales, right?  While I'd love to have Ziggy in our backyard, I do think that keeping my eyes open at sales gives me a good reason to keep shopping at them.  Besides....one thing that Nat has drawn a firm line on is garden ornaments.  So, gnome 1 will have to be enough for now.  For now.
backyard dreaming cast iron Fairy Gardens garden dreaming Garden Gnomes Growing Place Henri Studios