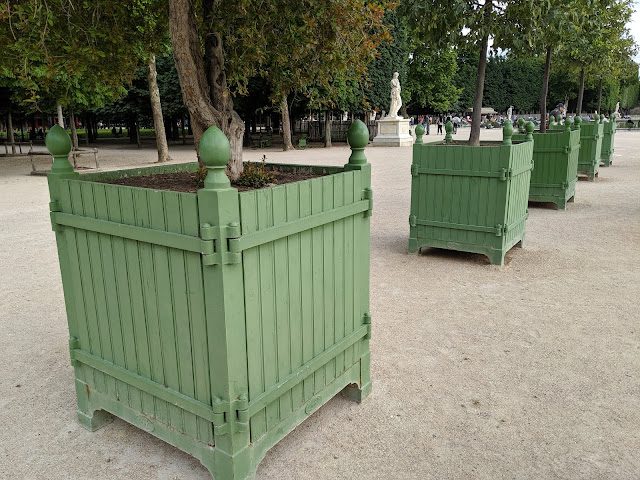 Yesterday, I posted about how after seeing the French gardeners use cocoa bean shell hull mulch in the gardens and beds in Luxembourg Gardens, I decided to try the stuff myself.  But, it wasn't just the mulch that made an impression on me during our visit.  So, too, did these large green tree containers.  They are all over Luxembourg Gardens and other parks/gardens.  They're really quite striking.

A little digging on the Web and I discover that they're actually called Château de Versailles tree-boxes.  There are a couple of sources that offer them.  But...brace yourself, they're not cheap.

What looked initially to me like wooden boxes turn out to be cast iron frames with wooden slats that make up the sides.  The corners and braces are all cast iron.  See here below:
If you've been following along on the blog, you might have seen the little planter box that I made for Natalie for our patio last week.  It is low and small and nothing like this at all.  And now that I've been in the presence of these French tree-boxes, I'm not certain that the course we're going to take our containers is going to change in a big way.  First, the color.  I didn't really ever consider this green for the planter that we built.  I was thinking of a dark stain/paint like a black or grey or blue.  But now?  I can't see anything other than this Versailles green. 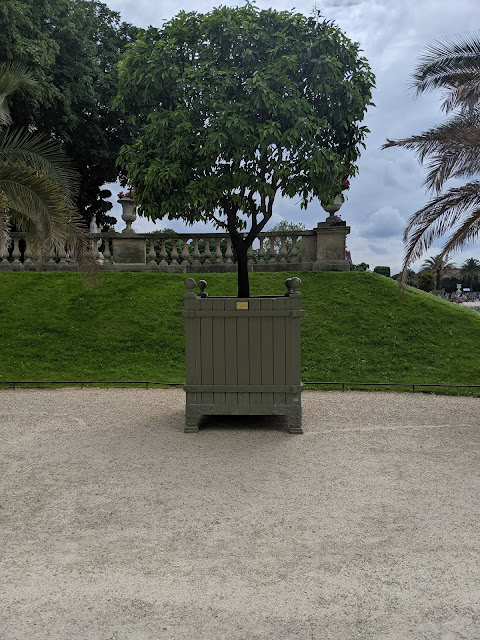 
Instead of stressing the plants and trees by transplanting several times a year from the gardens to the orangery, by planting and replanting these trees two times a year, André Le Nôtre invented a portable planter box where the trees could remain permanently all year long.

Here (below) is a run of these tree boxes placed outside in Luxembourg Gardens running in an arch.  There are citrus trees and giant palms and other tropicals. 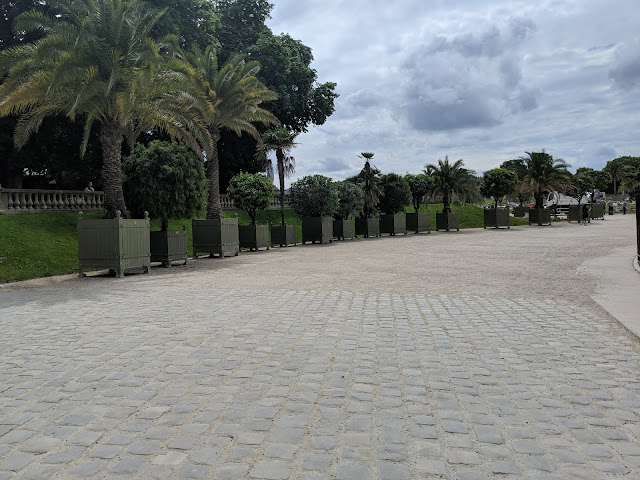 As I pointed out earlier, the cast iron ones aren't cheap, but they will, in theory last quite a while.  Seems like this is a you-get-what-you-pay-for kinda thing, right?  I don't think I need one of the giant one, but I also don't want a tiny one, either.  There are plans out there on the web to kind of replicate something like this, but I won't ever be able to replicate the cast iron parts.  Could add hinges and some metal elements and paint it the right shade of green, though?  Off to see if there are any plans I can crib from and build one for our own yard this Summer.
backyard dreaming containers France garden dreaming Luxembourg Gardens paris planters trees
Location: Luxembourg Gardens, 75006 Paris, France