Posted by Jake Parrillo on July 04, 2019
Back in April of this year, I published a list of seven additional or addendum items in my Spring/Summer To-Do List that included: "Work out the patio container situation".  We had a hodgepodge of containers in our back patio and Nat wanted to do something about it.  She shared a few photos of planters that she liked and we came across this plan from Gardener's World that featured a simple timber planter.  You can see it above and how it features a two-tiered planter with three sections.

After noodling it a bit and altering the plans a little, we ended up trying our own hand at making a similar patio planter.    Off I went to Menards and I ended up coming home with a van full of 2x3's of treated lumber.

That 'altering' of the plans included Nat's decision to lop off the top level and just make it a flat-topped planter.  Here's how it ended up: 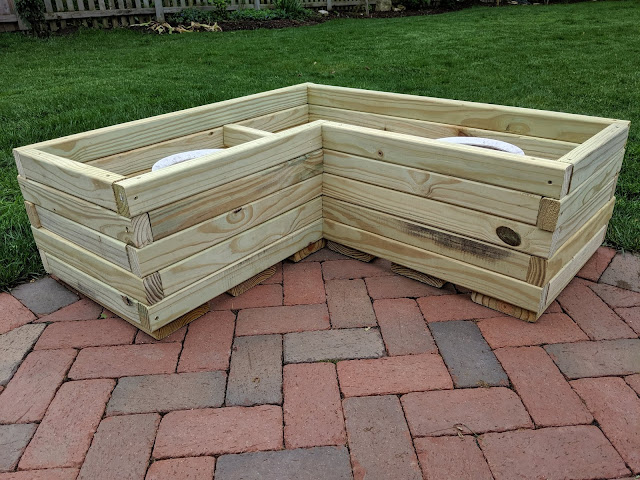 Because I chose the cheaper route with treated lumber, I wanted to be clear about a couple of things:  First, this isn't intended for vegetable gardening.  Just flowers.  And second, what you see is the naked wood.  Nat wants to stain/paint it, but we can't do that just yet because we have to let the chemicals leach out with time.  I *was* going to wait a bit before filling it up, but then we quickly realized that we'd not use this thing all Summer if we waited to stain it.  So, for next Spring, I'm thinking that we'll have a project on our list.   (Our recent trip to Paris has me really thinking about planting boxes and the colors of them.  More on this later.)

And since I decided to not stain/paint it, I went ahead and filled it.  Just like the (eventual) color of the planter box, the flowers that we chose for the planter are inspired by our trip to Paris, too.  We saw some gardeners planting a sequence of similar flowers in the beds in Luxembourg Gardens and wanted to replicate it.

I planted a couple of rows in a pattern of a Proven Winners Supertunia Blue Skies, a red geranium, a tall yellow marigold and a purple New Guinea Impatiens.  This photo shows them when they just went in.  Hoping they'll fill out and spread a bit as they settle in: 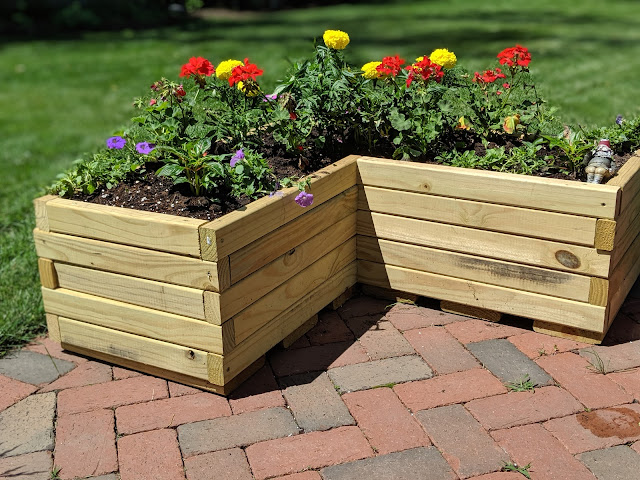 While this planter alone isn't enough to *solve* the patio container situation, I think it sets us on our way.  I'll post more of this planter when I get around to applying the stain/paint.
container gardening containers flowers garden diary geraniums marigolds patio planters proven winners to-do list addendum
Location: Downers Grove, IL, USA