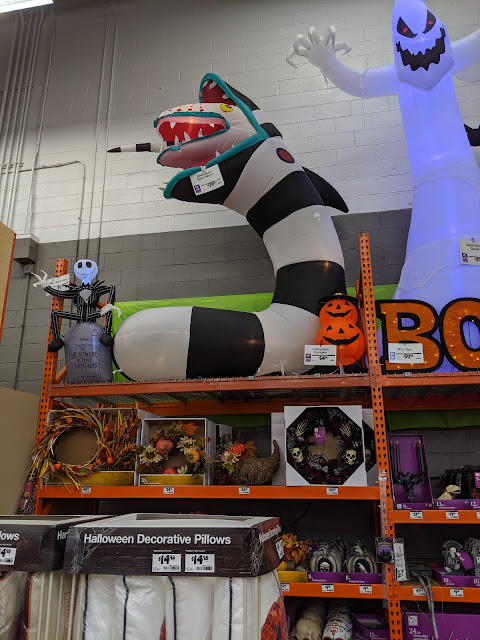 I've covered Halloween inflatables here on the blog over the years - but they've mostly been about Menards.  Like this Blinking Owl from a few years back.  Or these two big inflatables that Nat allows me to put on the porch for a few weeks the past two years.   This year Menards has gone all-in on Jack Skellington, Sally and Oogie Boogie from 'The Nightmare Before Christmas'.

But, I've been going to Home Depot a little bit more regularly than I was in the past and discovered their Halloween section this season and am delighted (and surprised) by all the Beetlejuice stuff there.  The biggest piece in the whole section is this inflatable, animated Sand Worm that you can see in the photo above.

The center-most worm moves - and you can see it in this brief video below:


That's not the only Beetlejuice item - they also have another giant Sand Worm, but this time, it has a screen on the face of it to broadcast movies.  They claim to use 'projection mapping' (what they use on the Disney castle shows!) and that it plays scenes from the movies.  At $199, it isn't cheap, but check out the videos and photos at the product listing here on Home Depot - or check out my photo below. 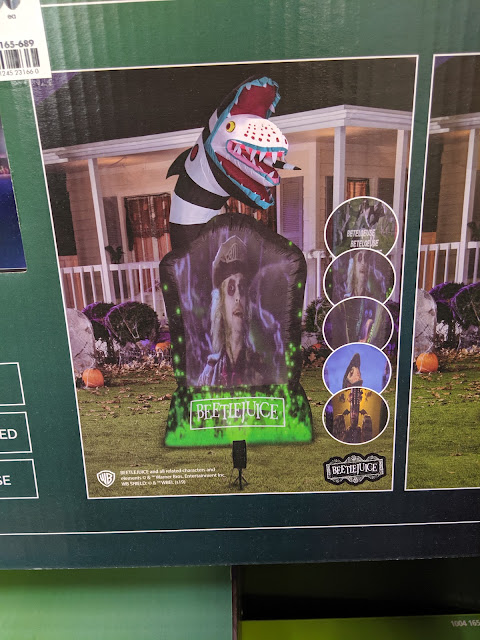 Beetlejuice the movie was released in March of 1988 - 30+ years ago.  I wonder why this year there are products from the movie?  Did something happen with the licensing rights recently to allow these manufacturers to make licensed products?

Or...are there that few Halloween-related movies that are family-friendly that have lasting power like Beetlejuice?  And the continued popularity is fueled by nostalgia?  I mean...I was ten years old when the movie came out.  So...that they're banking on people like me having kids and wanting to decorate for Halloween?  I mean....it is working!
Beetlejuice halloween halloween decorations home depot inflatables