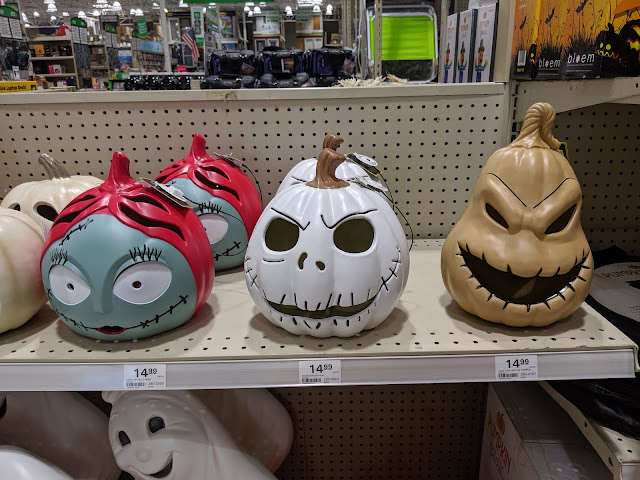 Menards has seemingly gone BIG on Tim Burton's Nightmare before Christmas movie with Jack Skellington, Sally, Oogie Boogie and even Zero items across their line.  From inflatables to stuffed plush, the licensing deal that they've struck with Disney appears to be their signature character line this Fall.

In the photo above, you see three lighted pumpkins:  Sally, Jack Skellington and Oogie Boogie all have a built-in LED light that lights up their interiors.  They're cute and I could see the Jack or Oogie Boogie one on the porch.  The Sally one is teal colored and I wonder if it might become part of the trend/used as an identifier of an allergy-free house that the whole movement that the 'Teal Pumpkin Project' has delivered in most neighborhoods.  Could be a nice shortcut for some folks?

Below is another look at a different set of these same Nightmare Before Christmas characters, but instead of 12" to 16" versions, these are tiny ones - like the size of a baseball.  Same character lineup with Sally, Jack and Oogie Boogie.    And they, too, light up: 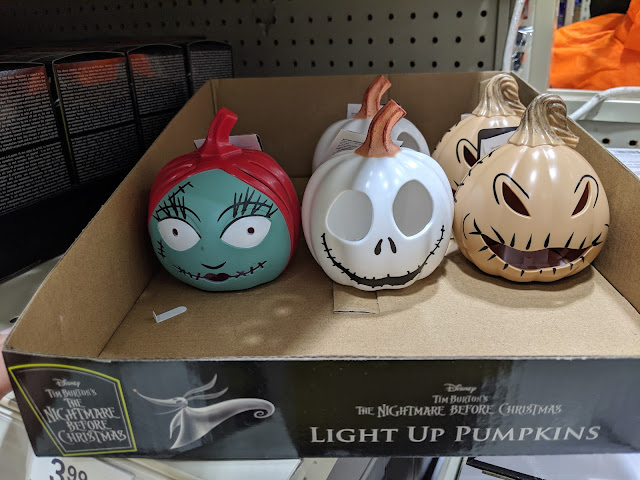 But, there's tons more from Tim Burton's The Nightmare Before Christmas at Menards.

Sally, too, has an inflatable.  And here's the Zero "greeter" that I mentioned earlier in the post.  He also comes in a 'hanging' version.

Halloween Creep is real and at Menards, you have to act quick.  Christmas stuff is coming right around the corner.  In 2018, I posted photos of Menards Christmas setup as part of the [Christmas Creep] section here on the blog in late September.  That means Jack Skellington and his crew have just a couple more weeks to hang around.