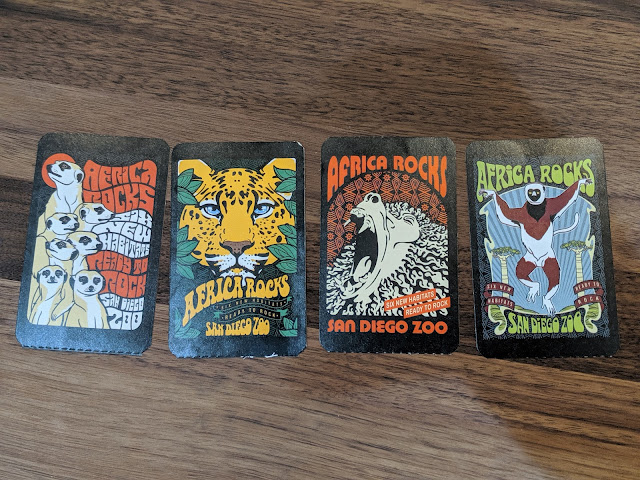 We visited the San Diego Zoo earlier this Summer during our trip to the West Coast.  This is the same trip that we went to the Hotel Del Coronado and stayed near Sunset Cliffs along the coast.   There were just four of us (Nat was tied up with some wedding-related commitments) and these were the four tickets that we bought.  Filing these here under Zoo-related ephemera here on the blog.

Africa Rocks opened in 2017 and is/was the largest San Diego Zoo construction project ever.  From San Diego Union-Tribune back a few years:


...the San Diego Zoo — fresh off celebrating its first 100 years — steps into the future with the opening of Africa Rocks, its biggest construction project ever.

The 8-acre, $68 million undertaking relies on the newest thinking about zoos, which find themselves in an ongoing debate about the treatment of animals in captivity and are designing exhibits that are more naturalistic, more focused on conservation than entertainment.

The San Diego Zoo and its sister facility, the Safari Park near Escondido, draw about 5 million people combined per year, and officials are counting on Africa Rocks to be a popular attraction. They’ve been featuring it on billboards around Southern California and are planning live TV broadcasts with various stations after it opens. The marketing campaign plays on the different meanings of the word “rocks” and includes posters that have a 1960s concert feel.

Emphasis, mine.  Those tickets are *totally* inspired by vintage, hippie-era concert posters.   I *knew* there was a reason that I liked them!

The Africa Rocks section of the Zoo site features all the animals in the habitat.  And in trying to match up who is on our tickets with who is in the habitat, I think we've got - from left to right: lemurs a leopard, a Hamadryas Baboon and what I think is a sloth?  But, he's (the sloth) not listed on the Africa Rocks site.

San Diego is a special place - Nat and I were engaged there (well...La Jolla, actually) and we went to the Zoo the next day (and we've been back a few times).  The Zoo is worth the visit -  though there's A LOT of walking - even for families like ours that have a world-class zoo in Brookfield Zoo right in our backyard.
california ephemera San Diego San Diego Zoo zoo Zoo ephemera
Location: 2920 Zoo Dr, San Diego, CA 92101, USA