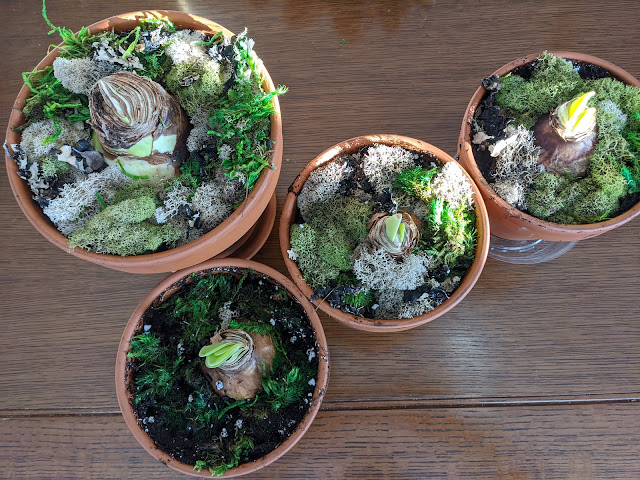 A few days ago, I posted about the Cherry Nymph Amaryllis bulb that I bought at Wannemaker's and planted in a pot to get the season started.  I mentioned in that post that we were going to try (again) a few smaller (and much cheaper) bulbs from Menards.  I found the receipt from Wannemaker's and the bulb that I bought there was $15.99 and after tax came in at $17.27.

The other ones that I bought at Menards are sold as a "gift box" and as you can see from the photo below are going for $5.49.  So...about 1/3rd of the price.  We bought three of them - one for each of the kids to do as a project.  These 'gift boxes' come with a plastic pot (with no drainage holes), what they call 'growing medium' (which I'm pretty sure is peat) and the bulb. 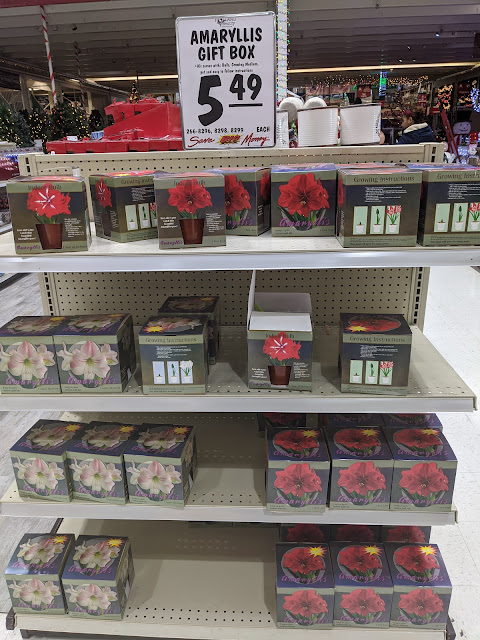 We bought one of each variety.  First is the Star of Holland. 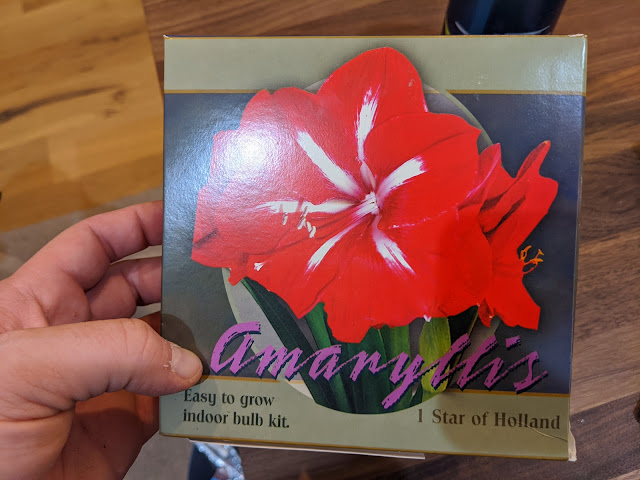 Next is the Red Lion. 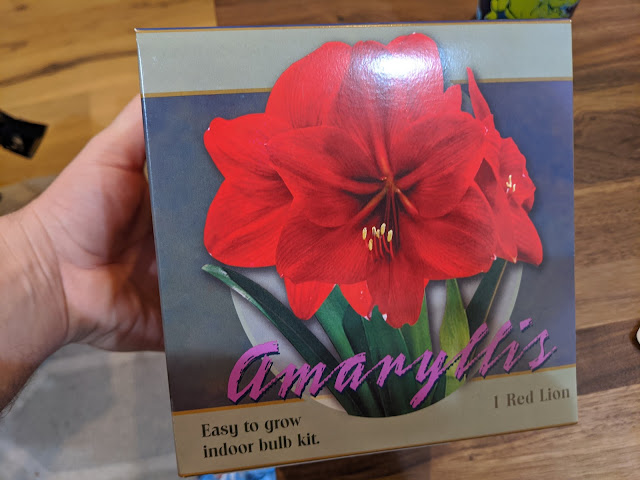 And last is the Apple Blossom. Here they are in their pots alongside the larger Cherry Nymph bulb.  Each of the three Menards bulbs have a little bit of *very* light green growth peeking out of the base of the bulbs.  Not sure if that was a false start?  Or something else?  But, maybe we'll get these to grow over the next few weeks. 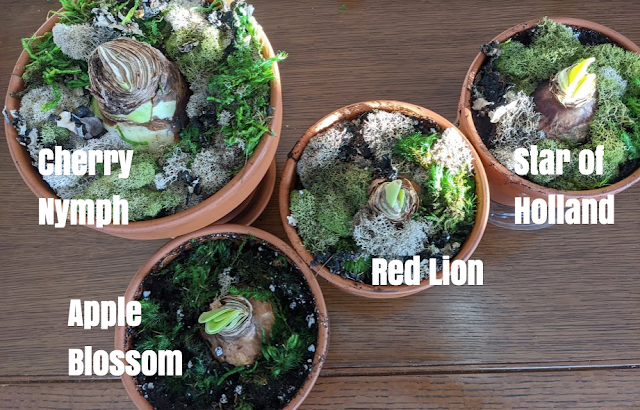 Here's a profile photo to show where they are in terms of height out of the gate. 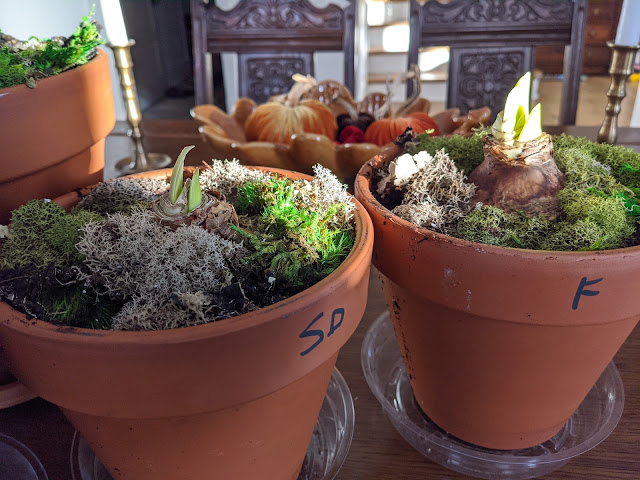 And here's the Cherry Nymph.  This has no 'new growth', but rather just some chopped-off stalks from last year. 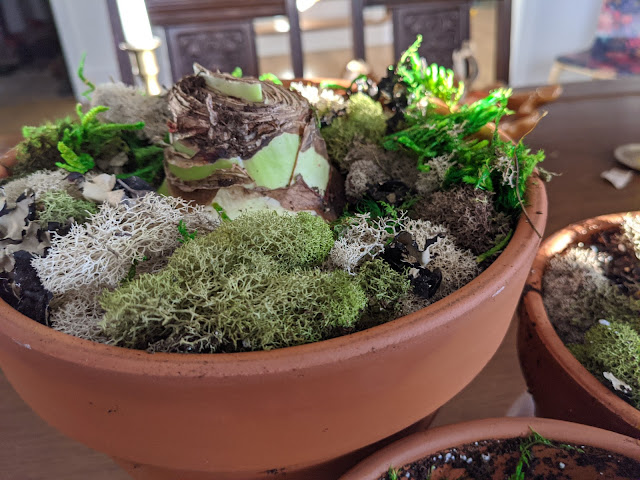 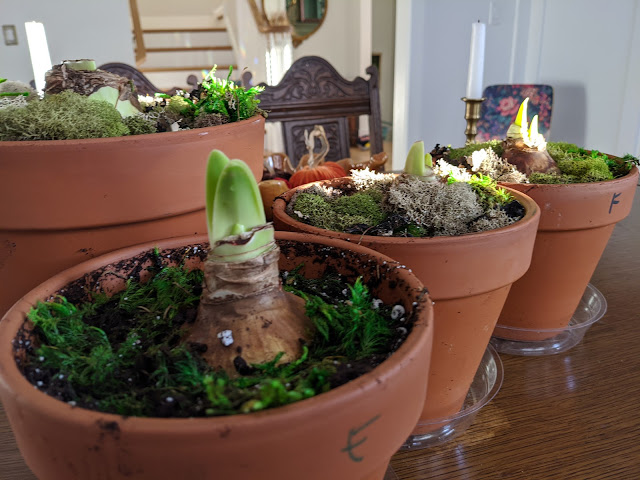 I've put all of these on our dining room table (for now) and they're all getting southern exposure and they're not too close to the window, so they'll be getting some good warmth on those roots.  After soaking them on their planting day (the Apple Blossom is two days behind the other three), I'll keep an eye on the moisture over the next few weeks.

With regards to watering your amaryllis bulb, the instructions read:


"Water once with lukewarm water when you first pot your amaryllis bulb, then water sparingly until you see the tip of the bud appear.  Then water once a week being careful not to over water, and you will soon be rewarded with spectacular blooms."

I've done this Menards experiment before and failed.  Two seasons ago, I grew a Menards bulb head-to-head with the Wannemaker's bulb and I was never able to force any growth on the Menards bulb.  That's just one data point and not enough to say if the bulbs are any good.  Also, I used the 'growing medium' last time and this time went with potting soil.  But, now we'll have three more and I think that gives us enough data to determine if the 'gift boxes' aren't really worth the money.
Amaryllis bulbs christmas flowers menards menards christmas wannemakers winter flowers