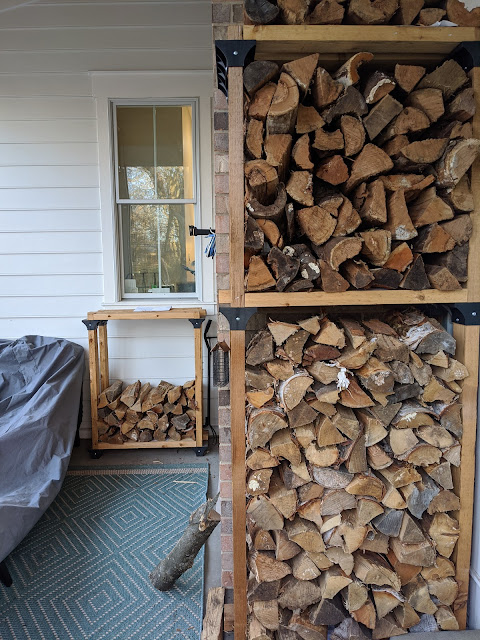 This is the first firewood check since we had a couple of face cords delivered in early October this year.  As we've done in the past, the guys stacked our Birch and Cherry firewood in a couple of spots including these racks in our screened porch that you see above.  Let's start there:  on the smaller rack in the back, all of the wood on top has been used and a little more than half of the rack has been burned down.  The rack in front is still untouched.  There's that one errant log leaning up against the fireplace, right?  That's one of the pieces that I cut from the downed Oak tree limb earlier this Fall.  Once the rack clears out, I'll drop it on there to season for a year or so.  In the screened porch, there's one other stack that existed against the wall that has already been burned off, too.

As for the other rack, it looks like it is more than halfway burned, too.    And all of the wood stacked in front of the rack has been consumed, too.  If you look closely at the photo below, you'll also notice a few more pieces of that downed Oak tree limb on the ground.  Once this rack is burned off, I'll stack those on there at the bottom to get to at the end of next season. 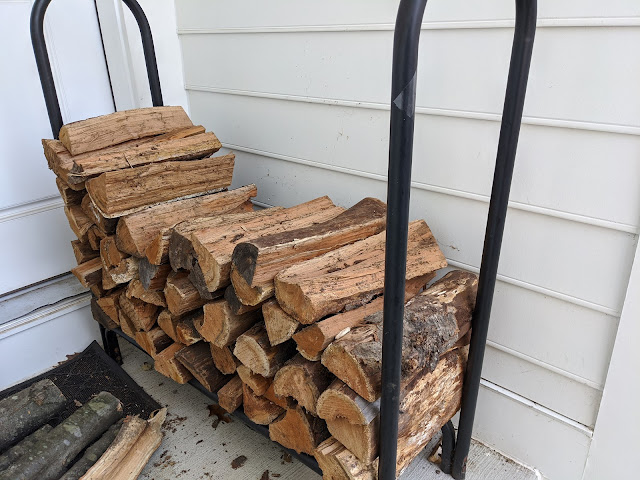 As for pacing, it is hard to say, but we're ahead of where we were in November of last year.  And also ahead of where we were in late December of last year.  It appears that we'd have to stretch out just the rack out on the stoop for three or so weeks to get back on pace.  We ordered in February of this year for our third face cord, but right now, based on what I'm seeing, I would guess that we'd have to reorder in January.   The question will come for the reorder as to whether we should reorder a full double set of face cords or just one to tide us over for the balance of Winter.  Last year, when I was ordering the refresh, they were out of both Birch and Cherry, so I ended with a blend of hardwoods (mostly Ash, I think).  There were plenty of times this Summer when we wanted to light a fire at night outside, but we didn't have any wood.  If those nicer woods are available, I'm thinking I will order both and season it myself all Summer long.
birch firewood cherry firewood firewood firewood consumption firewood planning winter