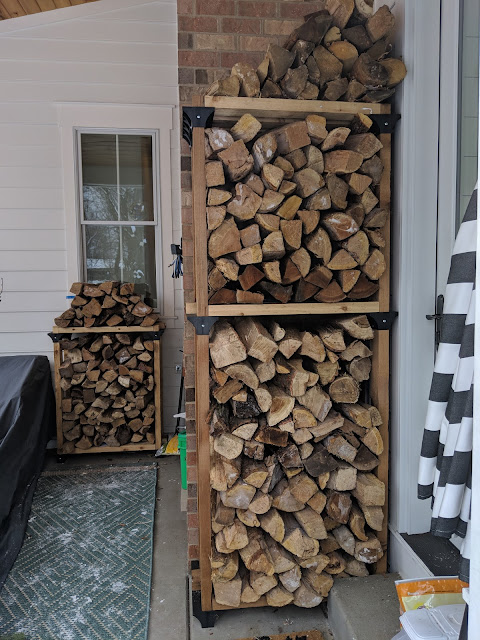 Just two weeks ago, I shared a photo in my ongoing tracking of our firewood consumption and mentioned that we had mostly exhausted our Fall supply of Cherry and Birch that we had delivered and stacked in our screened porch and side porch.  This photo you see above is from a week or so ago after we had a second, late-Winter delivery of another Facecord of firewood from Best Firewood in Aurora.

This would be the third Facecord of wood that we've worked through since early October.  That's four months - at approximately 1/2 of a Facecord per month.

The supplier that we use has a different type and caliber of wood available in late January/early February vs. what they have in September and October.

So, this order included a wood that we haven't bought before:  Oak.   This is a Facecord that is split 50/50 between Oak and Cherry.  But, the Cherry is *different* than the Cherry we had delivered in October.  If you look at the rack in on the right, you will see the top section being only Cherry.  But, look closely at the bottom row of the top section.  See that *darker* wood?  That's the Cherry Wood that we had delivered in October.  The rest?  That's the new Cherry.

In the background rack, you can see the full rack of Oak.  Both in the rack and on-top of the rack is only Oak.   The bottom of the rack on the right is a combo of bot woods. The way to tell the difference is mostly the bark.   One other thing to note:  not in this photo is a small pile of about 20 pieces of firewood that didn't fit on these racks.  We have them stacked up *inside* the screened porch fireplace as a place to temporarily hold them.

Now, the only question is how much longer this Winter will last.  Right after the Polar Vortex in late January, we had a warm-up (that melted all the snow).  But, the nights stayed cool, so we burned in the fireplace.  What will the rest of February look-like temperature-wise? Same with March?

Last year, I posted our firewood on February 10th and we discovered that we exhausted that supply well before the end of winter.  And that meant that for our Spring, Summer and Fall fires outside, I ended up having to go buy some snuggle wood.  This year, I'm expecting to have enough here to get us through to October when we'll get the Fall delivery.  At that point, the only question will be:  should we get two Facecords like we did this year?  Or, should we get the three Facecords that we ultimately know we're going to need.  The issue is storage, of course.  If we do three Facecords, we'll have to build at least one more large rack, if not two.  Nat isn't going to love that in terms of space/storage on the screened porch, but maybe I can build the rack outside and move it inside over time.
Best Firewood cherry firewood facecord firewood firewood consumption firewood planning Oak firewood screened porch
Location: Downers Grove, IL, USA