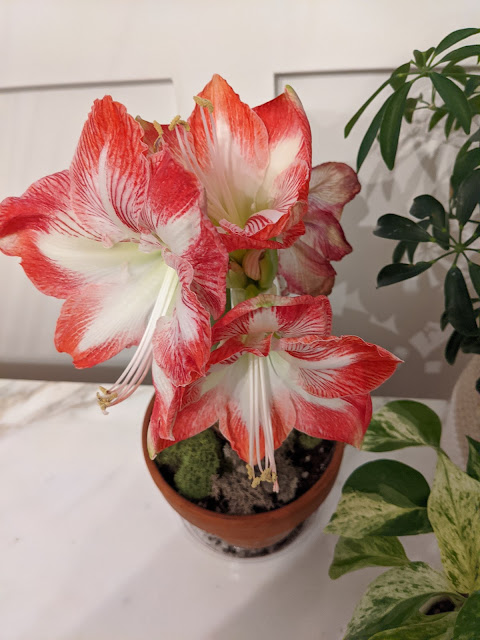 Almost two weeks after my last update and this Star of Holland Amaryllis bulb from Menards just keeps powering on.  It has put on a show that has lasted more than 10 days and we're now - I think - at peak flower.

In the photo at the top of the post you can see a more "top-down" view of the flower that includes the oldest bloom on the back that is just starting to fade.  That first bloom is now complemented by these three blooms that have emerged just in time for Christmas.  There are two, distinct stalks that have emerged from the bulb that you can see in the photo below.  No real 'leafs' or other green shoots coming out of the bulb at this point. 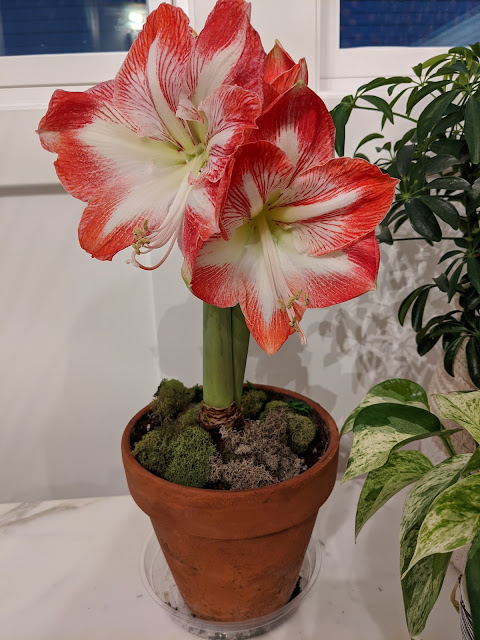 Here's the original post in this year's (2019) series of Amaryllis bulbs that shows off all four of the containers.   This Star of Holland bulb is on the far right of that original photo.

Then, by the end of November this Star of Holland had gone far ahead of the other ones.  Once the bud emerged, I switched to a diluted alcohol/water mixture to try to stunt the height on the stalk(s).

And, finally, on December 11th of this year, I shared photos of the Star of Holland about to unfurl and show off for the Christmas season.

The other three are each in different stages of development that I'll post some photos tomorrow to document their growth.
Amaryllis bulbs christmas christmas flowers menards winter flowers