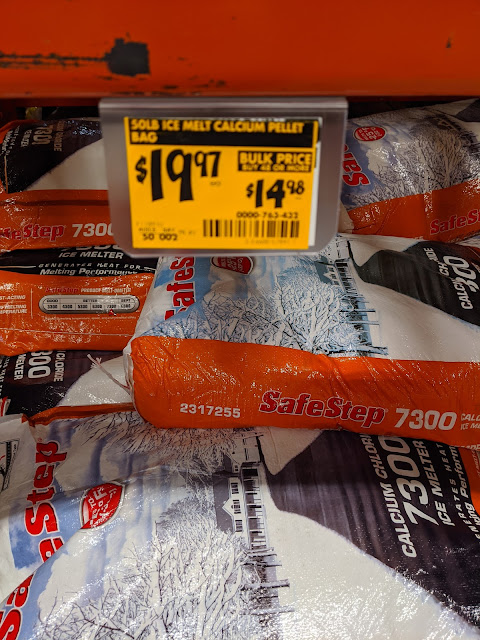 In November, I posted about how I had applied a second coat of concrete sealer to our driveway in an attempt to preserve it as best I can.  Part of that preservation is also trying to NOT use rock salt on it to melt ice and snow.  That's a best practice - not using salt - that was shared by our builder, but you can also find it online all over the place.   Some folks call salt the "#1 enemy of concrete".  So, I try to take care of my driveway without salt or any other melting products.  The issue is that our driveway is on an incline.  You might not be able to tell from this photo, but we're uphill from the street to our driveway.

Have you ever come across a concrete driveway that looks like this?  Pitted and full of pockmarks?  That's very often because of salt damage.

Taking care of our driveway - by keeping it free of snow and ice - is totally doable if we don't have to take the cars in-and-out during a snowstorm.  If I can get to the driveway and clear it before we pull the car out or drive in - and stay on top of it - I can keep the concrete clean.  But, when we get our tires on the concrete the snow and ice compacts and sometimes it calls for an ice melting product.

Here's a post from December of 2017 that shows what I'm talking about:  I was able to blow away the light snow, but because I didn't get to it before we pulled the car in, there are those tire tracks going up.

Also, the sidewalks get plenty of boots walking on them before I can clean it up, so I often will use an ice melting product there, too.

So what's an alternative?   Calcium Chloride is one of them.  That they bill as 'safe for concrete'.

Home Depot sells these 50# bags of the stuff for $20.  SafeStep 7300 that you can find on Amazon for a marked-up price (double the cost of Home Depot!)    Last year, I used this stuff sparingly and I don't think I went through 50 pounds the entire season.  I bought this bag in early December and so far, it is still sealed and I haven't used any of it.  We'll see what January and February hold, though.  I'm guessing the worst is still ahead of us in and around Chicago.
Calcium Chloride driveway house maintenance Rock Salt winter winter damage
Location: Downers Grove, IL, USA