Posted by Jake Parrillo on January 23, 2020
A slight pause from the [tree dreaming] posts to quickly revisit my three-bin compost setup.  Winter means idle time for me in the garden, so I've been thinking about projects to work on this Summer and that includes my compost pile setup.  I have two compost setups:  first....a large 80 gallon tumbler.  And then a 3-bin fence setup.  The tumbler is in our yard and I filled it with quite a bit of browns this Fall and included some greens (grass clippings).  With Winter here, the composting is very slow, so I've been bringing some kitchen scraps out there including vegetables, coffee grounds, egg shells to try to add some nitrogen.

The three-bin setup is one that I haven't touched since the Fall after I piled on leaves.

I set it up in Spring and started to add some material.

I revisited the bin on December 1st when I had filled the left bin and the middle bin with Fall leaves (carbons).  A couple of weeks later, I posted about how I haven't been good about 'turning' the bins and found an idea with vertical perforated pvc pipe inserted into the piles to provide some aeration.  That is something that I then added to my 2020 to-do list.

Below, you'll see a photo from a couple weeks ago that shows what I'm calling the 'final state' of our bins.  The one on the left is now about 2/3rds full.  Almost the entire top layer is Fall leaves:  Carbon.  You can also see more carbon storage in middle: 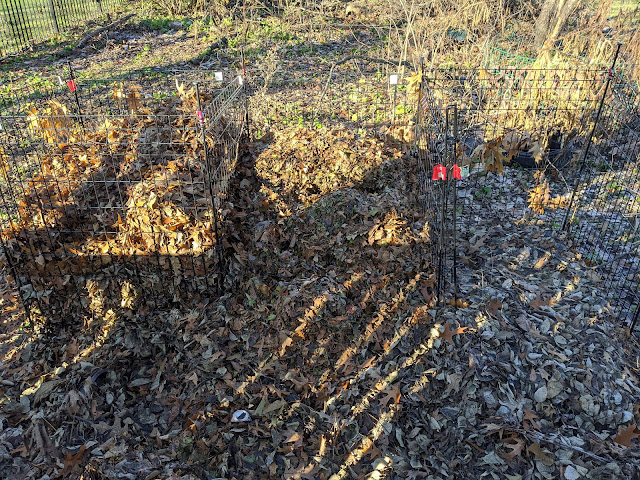 Someone I follow online (YouTube, I think??) referenced compost aeration and this guide from the New York City Recycles program that includes some aeration ideas.  Similar to the PVC pipe idea that I mentioned in December (Vertical PVC), the folks from NYC talk about using horizontally-inserted perforated PVC pipe to aid in aeration.  From Chapter 3-21 in the guide:

They call it 'passive aeration' and point out that increasing the air flow near the bottom of the compost pile can be very beneficial.   When things get too compacted and no air gets in the material, everything slows down.  They're calling for the insertion of a handful of horizontal pvc tubes - their examples show caps on the ends - that can be pounded through the middle of the pile.  I could see using this inside my three-bin system, right?  Have to size the pipes to the right size (the dimensions of the bin) and then drill some holes in them.

Seems like 2" PVC pipe with 1/2" holes is the right answer - that retains enough heat but also provides for aeration.  I initially put compost bin aeration on my 2020 to-do list, but now I think I have the solve for it.  Confirmed on the list, now.
2020 to-do list aeration compost compost gardening garden diary
Location: Downers Grove, IL, USA