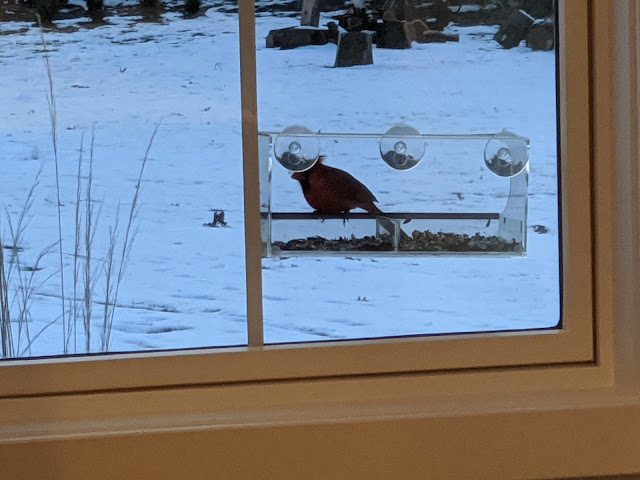 Back in the Fall, the KotBT had a birthday and one of the gifts that we gave him was a window bird feeder.  The kind that use suction cups to attach to the window.  The one we have is this one from Amazon that they say is their #1 best seller in the category.  We have a variety feeders already - including a fly-through, a couple of suet cages, one of the smaller Squirrel Busters and a squirrel 'big ole' cob' bungee feeder.  But, those are all set out in the yard a bit.  In a spot where we can see them and observe the critters/birds, but also far enough to have any critters not want to make a home close to our house/patio.

These window feeders have been around forever and I've been skeptical of them.  I mean...birds get spooked by people.  And...from what I know, they don't love windows and the reflections off of them.  So, mounting a feeder on the window seems like a long shot in terms of getting any action on it.

We talked about putting it in various places including upstairs in the  KotBT's room.  But, we settled on the window in our kitchen nook.  That was four of five months ago.  The seeds went untouched.  And we didn't refill it with anything other than the seed that I initially put in it more than 120 days ago.

But, this skeptic has been turned on window feeders.  I came home from work one evening recently and I was all alone in the kitchen when I saw out of the corner of my eye some movement.  And sure enough...there was this male Cardinal sitting on the perch cracking open the Black Oil Sunflower Seeds that had remained since the Fall.

I didn't want to move too close to him as he ate, so I used zoom on my Pixel 4Xl in the photo above.  And I was able to shoot this short video in zoom mode, too.


This makes me now wonder....would those 'window bird nesting boxes' work, too?  The ones that say that they have one-way mirrors (or something like that)?  The photos show a bird's nest with little birdies in it, but like this feeder, I'm super skeptical of those, too.  But, now?  Maybe those will work, too?

After this cardinal left, I went over to look at the feeder to see how much seed had been consumed.  And, it wasn't just this bird who had visited.  Most of the seed was cracked open and the supply was exhausted.  Mostly shells were left.

I will note that this was a stretch of two or three days where I wasn't able to replenish the big set of feeders with seed, so I'm guessing that they might have gone empty and then force the birds who seem to come back often to root around for other sources.  At least...that's my theory as to why this one (finally) got some action on it.  For now, I'm going to fill it back up again and then monitor it for usage.  And who knows...maybe I'll start to read the reviews of those window-hung nesting boxes to see if there's one worth trying.  The nesting season will be on us soon enough.
#hornbeamhill #newoldbackyard backyard birds bird seed birding birds cardinals garden diary kotbt Winter birding
Location: Downers Grove, IL, USA