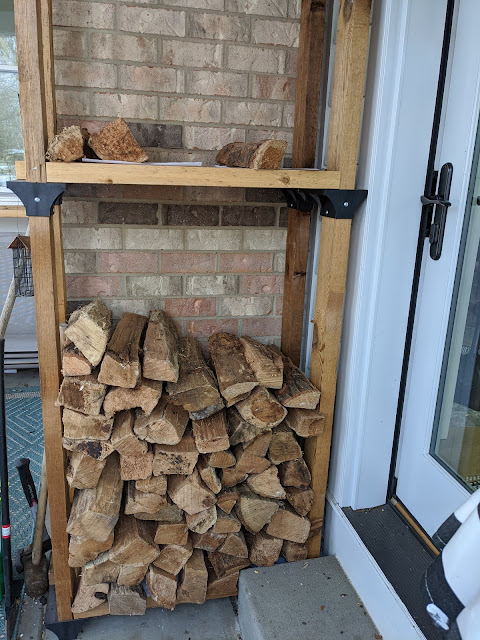 The last time I did a firewood consumption check was with this post on January 20th of 2020.  A little bit over a month has past and we've exhausted probably 3/4 of the face cord that was delivered.  That's a fast pace.  In 2019, I ordered the backfill face cord in mid-February, so this year was running three weeks ahead of last year.

Last year, it seemed that the firewood lasted until right up at the beginning of Spring.  This year, I'm not so sure it will.

One of the things that we learned last year is that we wished we had firewood for during the Summer and Fall - to burn in our outdoor fireplace.  So, that means that if we burn through our rack in March, we won't have anything to burn - unless we turn to the Ash firewood that we picked up on our block.

Knowing we're now in year three of buying and burning firewood, we might need to consider ordering more in the Fall or doubling the second order.

The issue with ordering THREE face cords in the Fall is storage and space.  I'd prefer to do that because it seems that the wood we get in the Fall is ALWAYS better than what we get in January or February.  But, I don't have the capacity to hold that additional face cord.  I would need to either buy/build an additional rack and then have to pull and re-stack the wood in the racks in the screened porch.  Currently, all of our firewood is covered - most of it inside the porch and the balance up on a stoop, under a porch roof out of the elements.  If I added that fourth rack, it would likely have to be outside somewhere that may not be covered.  Or, wonder if I could convince Nat to allow another rack inside the screened porch just during the Fall/Winter.  I build one out of cedar (to match the other ones) that I haul in from outdoors right ahead of the Fall delivery.  We consume the supply in said new rack over the Winter.  By the time we go to use the screened porch come Spring, the rack will be empty and I can move it outside.  Being cedar, it can handle being the elements - especially if I tucked it up under an overhang or covered it.

Peeping the space that *could* be available, I would imagine something that is similar in size to the secondary (smaller) existing screened porch rack (like...6' long x 3.5' tall).  And on the stoop besides where I put the balance of our firewood in the Fall (outside my office), there's room for another rack.  The issue with putting it there is that it would make that walkway unusable.

But...stay with me here.  Say that I *did* build out those two additional racks.  Would that be enough to support a delivery of three face cords?  I'm not so sure.  If you look at this Fall's delivery, you can see that I ALREADY don't have enough racking for two face cords.  Head here and scroll down.  Outside on the stoop, there's a pile of 20-30 pieces of firewood that couldn't fit on the rack.  And inside the screened porch, they piled up about 50 or so pieces of firewood in the exact spot I'm talking about adding a rack.   Now, if I had a rack there, I could fit about double what's there, but it isn't a huge difference.

Having the space is one part of the equation, so, too is the quality of the firewood.  But, also cost.  They don't give any breaks for 3 face cords.  So, the financial incentive isn't there.  It is mostly about the quality of the wood.  For this year, I suppose the big question is about the Ash firewood and how it is seasoned.  Do we blow through a bunch of that this Summer and Fall?  If so, then, I would want to think long/hard about ordering a 3rd face cord in the Fall.  And that means thinking about potentially building the racks before Fall arrives.
Best Firewood cherry firewood firewood firewood consumption firewood planning firewood rack Oak firewood
Location: Downers Grove, IL, USA