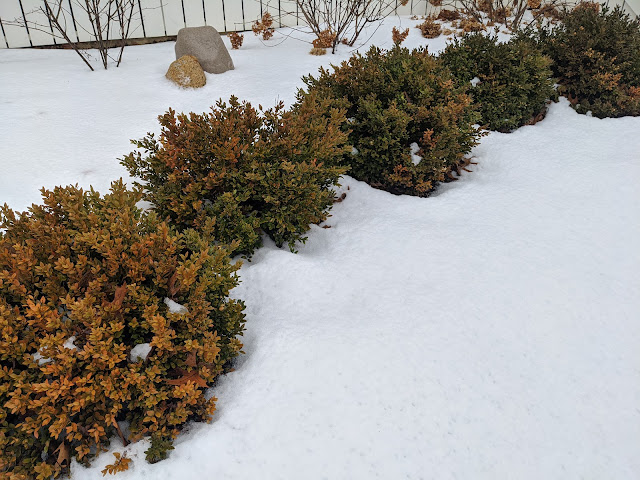 I was out in the yard recently wiring up that one errant trunk on the Saucer Magnolia and snapped a couple of photos of our front yard boxwoods.  You can see them above and you'll note that a few of them are showing quite a bit of brown/orange color on them.  Wondering if this is normal Winter behavior or something else.  I also note that they're all experiencing different amounts of this orange/rust coloring.

The first boxwood on the left is the most orange - and you can see a photo of this one below: 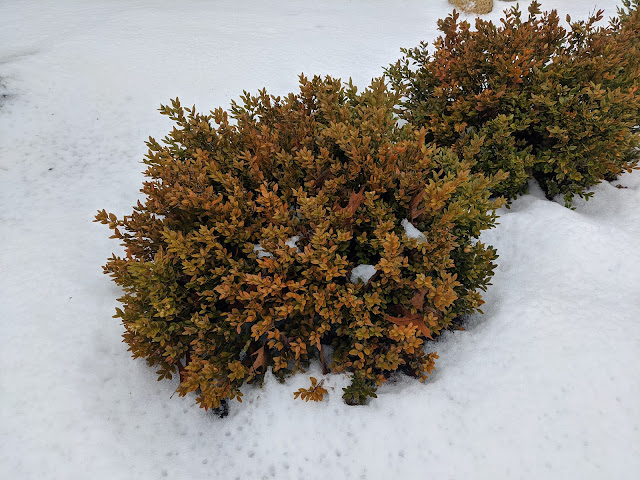 The ones further North - which start to get out of the top photo are the most green.  The end one (on the North) has a 'hole' in it that was from some damage the previous few Winters.  See that one below that shows an orange section that has a large gaping 'hole' behind it. 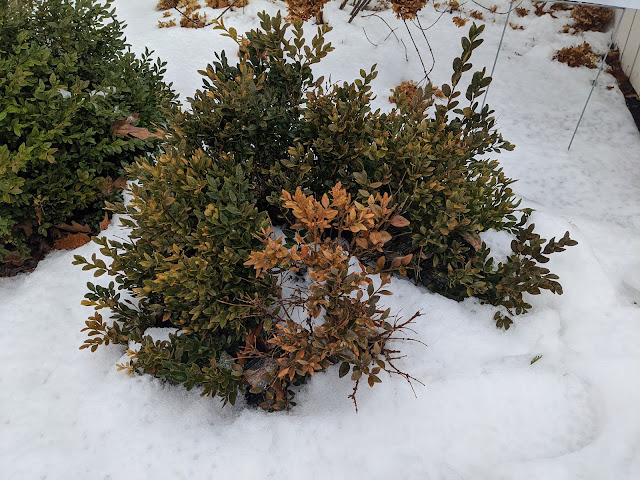 The first time that I posted a photo of these boxwoods was in May of 2018 in this post about mulch.  You can tell that these have grown in size in the (almost) two years since.

As for the brown or orange color, I'm not sure if we're dealing with something that is normal or if we're going to have some damage to these come Springtime.

From this story, the orange color is likely temporary:


Consistent with their role as background shrubs, boxwood do not like the drama of extreme weather. If exposed to bright sun in winter, some boxwood foliage temporarily loses its green color; leaves take on an orange cast or turn an unattractive brownish-yellow. This can also happen in cold winter weather or as a result of rough or icy winds. The color change is unattractive but not harmful and reverses quickly in the spring as temperatures rise.

I'm sure that you've seen people who wrap their boxwoods in burlap to protect them from Winter.  So far, we haven't done that, but I'm wondering if we should next Winter?  I'll put it on the list of things to do in 2020:  wrap the boxwoods to protect from Winter damage.
#hornbeamhill 2020 to-do list boxwoods front yard front yard landscaping garden diary gardening shrubs winter damage
Location: Downers Grove, IL, USA