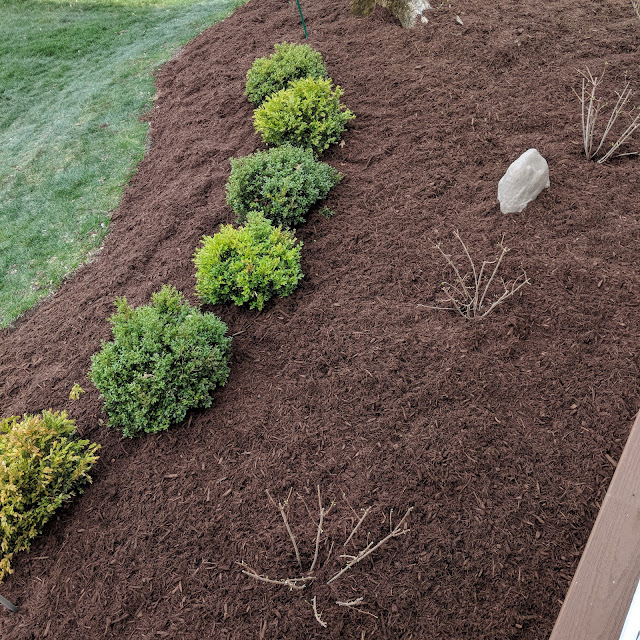 Mulch delivered, installed and spread for the year:  Done and Done.

Here's the post (with the same title) from 2011 including a video of the steaming pile being dumped on our driveway in Elmhurst.  Here's the post from 2013 showing our (then) beds being freshly mulched.  And here's the post from 2015.  Weird that I posted them every two years, despite mulch being applied every year.   But, in that post from 2015, you can see some of yard that I had worked at for six years to get it to a place that I was starting to be happy with in terms of plants and landscape.  We had daylilies, some HUGE stands of Ostrich Ferns, a happy bunch of variegated hostas, a really beautiful (if just for a week or so) crabapple tree, a Ginko tree, an out-of-control Pussy Willow and even a fruiting Pear tree all in that one shot.

I took the photo above in this post from our front porch and it shows three of our Strawberry Vanilla Hydrangeas and six of our Green Velvet Boxwoods.  They're all in what seems to me to be different shades of green, which has me wondering if they are, actually, indeed all the same variety?  They need some shape to them, but I'm going to wait a season, let them grow out/up a bit, then shape them in the Spring of 2019.  Also, how about that rock.  Looks super real, right?!?!

In terms of record-keeping here on my garden diary, it's important to note that we mulched these this year: