What about a Japanese Maple Tree?

Posted by Jake Parrillo on February 25, 2020
Over the past few years, I've posted a few times about Japanese-inspired gardening and how I'm increasingly drawn to it for various reasons.  I spent a bit of time walking around Gotenyama Gardens in Tokyo and as I walked down the steps into the kind-of sunken garden, I was surrounded by a lush garden in the middle of a metropolitan city.   And that fascination with Japanese gardens has manifested itself in a couple of things, but mostly columnar trees.  But, there are other elements that I've talked about including ferns and this Japanese Forest Grass, too.  One of the types of tree that I don't seem to have covered at all here on the blog is a Japanese Maple tree.  I've seen them at the garden center over the past few years and they're always tempting (and pricey), but I didn't know too much about them to ever make a decision on them.  This Winter, I started to poke around them as thinking about this part of our yard and wanted to get a little bit smarter about how to use them in the landscape.

And I've poked around on trees that are what I'd consider 'adjacent' to the Japanese Maples including this Diana Weeping Japanese Larch tree recently.

What've I've found is that the zone you live in (I garden in Zone 5b) matters.  Quite a bit.  Generally speaking, Japanese Maples are for Zone 5 to Zone 8.  That's good for me (kinda) as it means we can grow them.  But, it means that only SOME of the Maples are actually hardy down to Zone 5.  Also...if you were thinking of growing a Japanese Maple in a container, the rule of them is that you select a plant that is hardy TWO (2) zones lower than where you live to ensure that the roots can handle the cold.  For me (Zone 5b), that means I need to select trees for containers down to Zone 3b.

There are no Japanese Maples down to Zone 3.  Means (pretty much for me) no containers.  I don't have a greenhouse or a place that I can bring the tree in for the Winter, so that means that if I want a Japanese Maple tree, I'm going to have to plant it in the ground.

I also looked around for some guidance on my zone in particular and found this story in the Kane County Chronicle (a local suburban paper) that says:  go ahead and plant a Japanese Maple around here.  They give a couple of recommended varieties including Bloodgood, Crimson Queen, Tamukeyama and the Viridis.

Looking around online for a Japanese Maple for our backyard at Hornbeam Hill, it seems that there are a few choices that governing the direction.

The tree that the KCC recommends is called the Bloodgood Japanese Maple.  It is the one that I see most often at garden centers.  It is of the more upright variety and can grow 15 feet tall.    From the description:

They're selling a 5# container for $129 right now - and that's typically about what I see them at places like Home Depot.  Somewhere between $99 and $149.99.  Here's what it looks like in a multi-trunk variety:


There appears to be a slight tweak to the Bloodgood that *may* make it more suitable to our cold climate:  this Emperor 1 variety.  It is interesting that they use THE.EXACT.SAME.PHOTO of the tree for that listing, so it is safe to say that they're close cousins.    There's a good discussion on this Houzz thread about the Emperor 1 vs. Bloodgood Japanese Maples for my exact zone (Suburbs of Chicago) that lays out how the Emperor is slightly (potentially) better (leafs out later, is a bit hardier, etc).  The Emperor 1 online can be found for $99 for that same 3-4' tree.  Monrovia has a nice product-listing page with this photo (below). 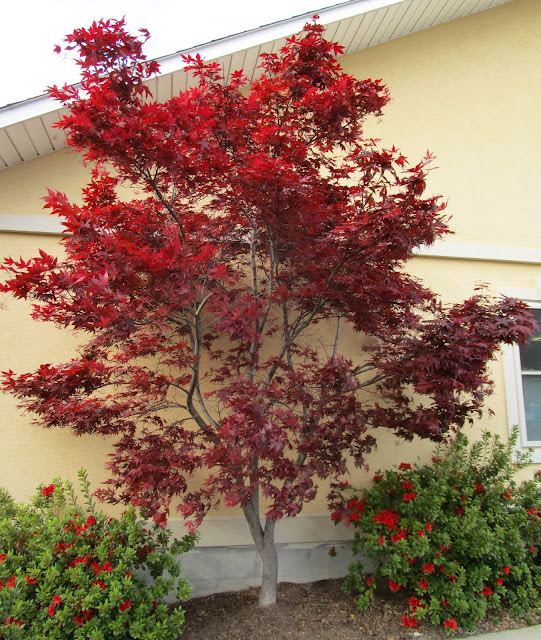 The listing includes this description, too:


Showy and colorful, this is among the best Japanese maple for smaller city yards. Plant in front as a single accent at entries and in foundation beds. Perfectly sized for around outdoor living spaces that ask for shelter and privacy without concern for an overly large tree at maturity. Bold autumn hues provide a long range focal point, particularly against a background of dark evergreen trees. Quintessential tree for the acid garden and among conifers.

There are some interesting things you can pick up below - in particular the big about hanging in an acidic garden amongst conifers.


Twombly’s Red Sentinel Japanese Maple is the only upright, columnar Japanese maple tree in existence. All other varieties are rounded and broad, often as wide as they are tall. This one is very different – it forms a narrow, tight column of beautiful rich red leaves, making the perfect accent in your garden. It is also vigorous and fast growing, so you will soon have a beautiful specimen to enjoy.


Just like the Bloodgood, this Sentinel tree falls on the red side of the color spectrum.

But, what about the dwarfs?  There are a couple that I've come across that are hardy down to our zone that I'm attracted to for our yard.  First up is the Virdis Weeping Japanese Maple tree.  I found it online here for $129.99 for a 3-4 foot tree.  This one is dwarf AND green.  Here's what it looks like:


Isn't that a striking tree?  I kind of love that it is green.  And that green part is unique.  From the listing:


Most kinds grown have red leaves but unless carefully located the dark red color simply makes your tree disappear into the shade from a distance. Green-leaved forms on the other hand, when mature in the garden, often make more much more impact than their red cousins. They also have the most spectacular fall color, in brilliant oranges, yellows and shades of scarlet.

This green one seems to give you the best of both worlds.  Green leaves during the Spring and Summer and a little bit of orange/yellow and red in the Fall.

Here's another green-leaf'd one that is interesting called the Aureum Japanese Maple.  Both of these are compact (dwarf) and slow-growing.  Getting say..eight feet wide and just six to eight feet tall in ten or so years.

The other dwarf or compact one that is suitable for our zone that I've come across online is this Orangeola Japanese Maple.  Just look at this beauty:

So...that leads me to conclude that there are merits to all four dimensions in these trees.  At least for our yard.  I like the upright, the multi-trunked and the columnar.  I also like the red and the green.

But, where?  Or...if we're talking about all four dimensions...which one first?