Just a little bit over a week ago, I shared ANOTHER1 post about the trees that I saw in Tokyo and talked about how I'm in the middle of a bit of a crush on Japanese horticulture.  That crush certainly is most-focused on trees (both deciduous and coniferous) that are typically columnar in shape, but it also extends to gardens in general.  This post is about a little hidden garden called the Gotenyama Garden that is right outside the Tokyo Marriott in Shinagawa.  The same place that had that epic honeycomb setup I shared back in July.

The Cherry Blossom tree that I included in a post with some Nagoya-area trees back in April of this year is from the very top of Gotenyama Garden, but that was as far as I was able to *get* to in the garden on my previous trip.  Just a quick step outside to grab a photo.  This time, I was able to wander in there a bit further.  And it is pretty great!

Starting with the image you see at the top that shows one of the intermediate levels of a five-or-six level fountain.  Some parts of it are natural and some are more like this above - structured.

The garden is old.  Edo era-old.  That's 1603 - 1868.  Old.  Of course, it has been changed over time, but just thinking that this area is potentially four hundred years old makes my brain smoke a bit.  There's a painting hanging in Honolulu Museum of Art that is titled:  The New Garden at Gotenyama in Shinagawa in the Evening.  It is dated from the mid 1790's.  Say...that parts of the garden I encountered are from that time when they painted this piece.  That's two-hundred years old.  Around the time of the founding of our own country.  Crazy.

This isn't on the scale of the other famous garden that I've been raving about:  Luxembourg Gardens in Paris.  It isn't formal.  And this one is MUCH smaller than that massive site.  But, they both are inviting in their different ways.

Luxembourg Gardens invite you to find a spot and sit down and take everything in.

Gotenyama Gardens invite you to wander.  Through the garden.  Down the stairs, across the bridge.  Around the corner.

Both invite you to contemplate and take in what surrounds you.  Maybe that's why I'm so drawn to both?

The Gotenyama Gardens is on a small site, not far from the Shinagawa Train station in a densely urban area.  It also is a surprise to see the green space tucked away.  At least it was for me.

From the Gotenyama Trust City site:


The Gotenyama Garden, which is located on the south side of Tokyo Marriott Hotel, is a Japanese garden that conveys to those in the present the lingering flavor of days past, when Gotenyama was a notable spot for cherry blossoms during the Edo era. On spacious grounds consisting of about 6,800 square meters, there is the tea house “Ujian” designed by architect Arata Isozaki, as well as “The Forest Chapel” of Tokyo Marriott Hotel. These color the events at Gotenyama with all the four seasons.

The main feature is none other than the abundant nature.

Here (below) is a shot showing off the foliage of ferns and other tropicals with their glossy leaves and winding path - edged by black rocks - that winds you through the garden down steps and into new areas that reveal themselves with every step. 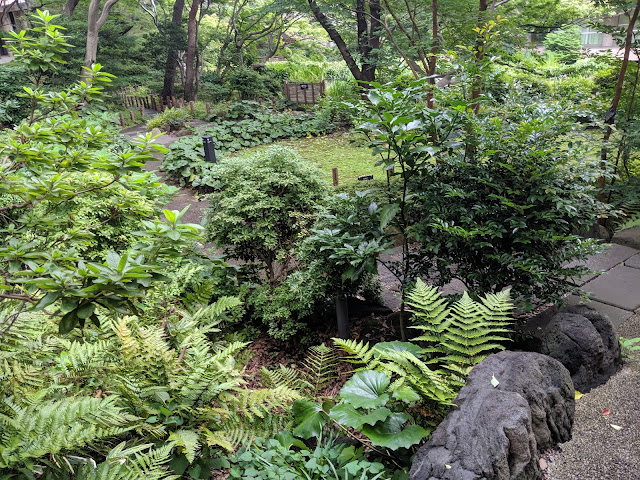 And of course, there are interestingly shaped/trained trees of various types.  This trunk and branch structure is quite dramatic as you edge closer to the pond at the bottom of the garden: 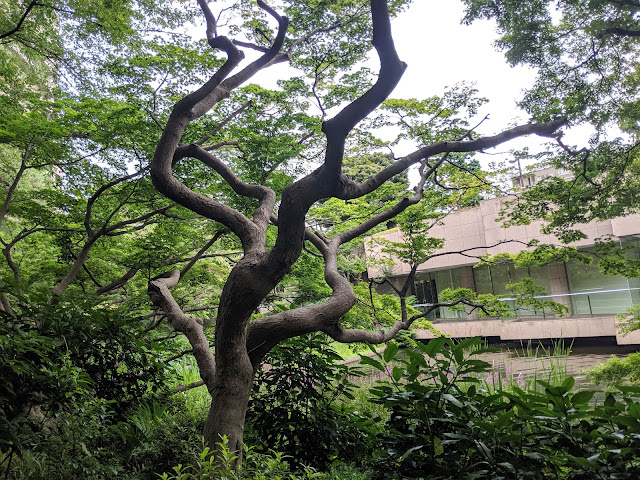 Near the top of the stairs - by the entrance to the garden - I came across this large, black bird.  He squawked at me a few times and I scurried past him.  There's plenty of stories about Tokyo's crow problem (if that's what you want to call it), but this thing was a beast, so I'm not certain it was a crow.  If it was...it was the *biggest* crow I've ever seen! 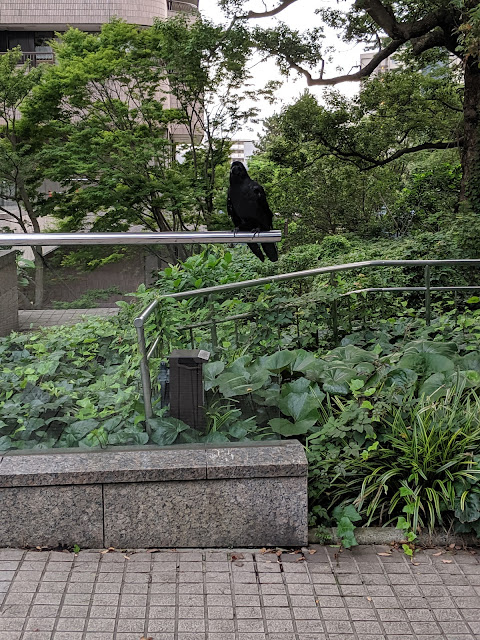 And a little further into the garden, I came across this stone post that I'm pretty sure is a tōrō or an ishidoro.  Something that we'd call a lantern that serves as a focus point in the garden. 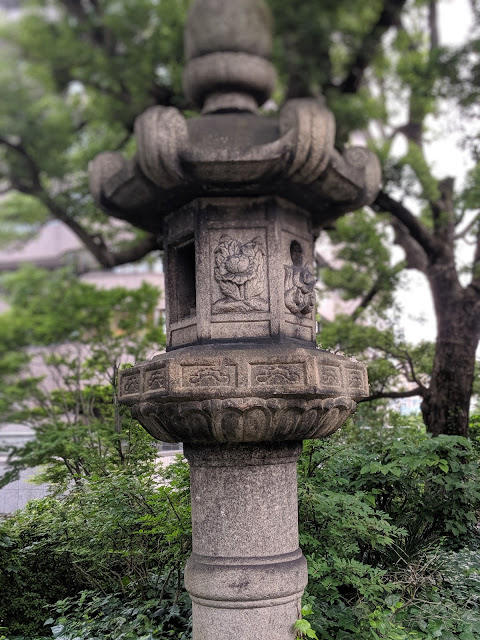 These things - like a lot of practices and objects - made their way to Japan via China.  They were tied to Buddhism.  From JapanVisitor:

Gardens were not, however, the origins of these lanterns. They were first used as votive lights. They were introduced to Japan from China via Korea at some time during the 6th century as part of the arriving Buddhist tradition, with the light held in the lamp representing the teachings of the Buddha that help overcome the darkness of ignorance.

...From the 16th century onwards, the value of such lanterns was recognized by the secular community, and they were adopted by masters of the Japanese way of tea, who included them in tea gardens to light the way, and by the wealthy owners of private residences.

During this period designs specially made for gardens began to appear, and granite lanterns are now a fixed feature of the Japanese garden.

I've already adopted the practice of espalier (just two trees, so far; Greenspire Lindens) and have a whole list of items from Luxembourg Gardens on my [Garden Inspiration] list now.   And I planted a flowering Cherry Tree in our yard after my first Tokyo visit, but now my list of Japanese Garden inspiration is long.  It includes some trained pines, a couple of bonsai trees, contemplation of columnar hard pruning of mature trees and a Japanese-inspired footbridge.  Now, I'm thinking that we might find a home - in the far reaches (behind the new, small but growing yew hedge maybe?!?) for a Japanese stone lantern like this one?

If I get back to the Tokyo Marriott, I'll make sure that I spend even more time exploring the Gotenyama Garden.