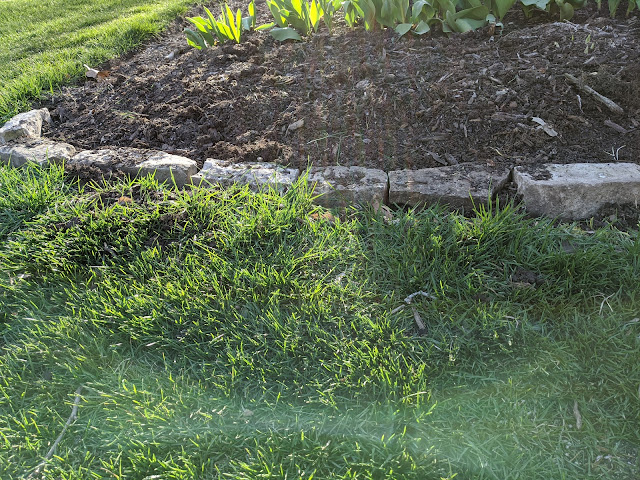 A couple of days ago, I posted a photo of some of our orange tulips blooming in the front yard and mentioned that in that photo there was a detail of a small (potentially partial) project that I had knocked off my list.  In the photo at the top you can see that project: a little buried flagstone retaining 'ledge'.   In mid-April, I posted about my 'floating mulch' problem in this area due to the grade (it is on a slope) and water run-off (some gutter downspouts come out in this area).

In that post, I speculated that if I dug-in some retaining blocks that I could keep the cocoa bean hull mulch from migrating too far into the lawn.  But, at the same time, I didn't want to make it super visible from down near the sidewalk.  What you see at the top of this post is my compromise.  I dug in the blocks a few inches and left them proud of the mulch by about 1/2" or so.

If you look at the photo below, you can get a better sense for how they look from a little further away and how they're not really that tall/viewable: 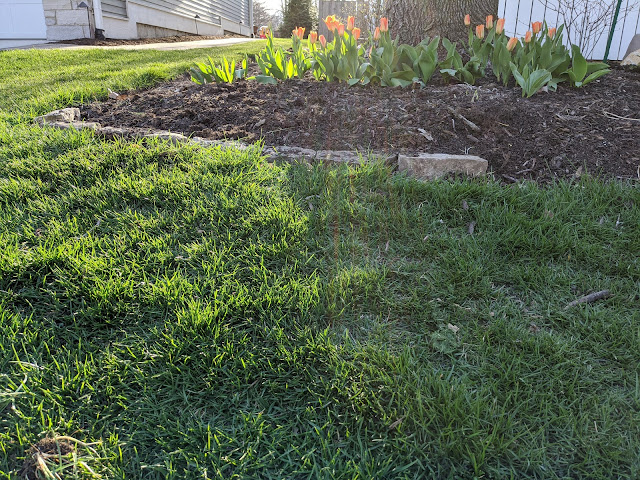 I used just seven pieces of flagstone (block) that I had on hand and kind of focused on the retaining of the mulch in the corner - because that's where it has historically floated away.  The water run-off comes down to the left (as you face it) of the large maple - and the corner that I retained is the problem area.

With the newly laid layer of hardwood fine mulch around part of this area and some rocks added near the pop-up drain, the erosion problem is being addressed at both ends.
Cocoa Bean Shell Mulch erosion flagstone flower beds front yard garden diary mulch mulch beds retaining walls