A Garden Train In Our Neighborhood 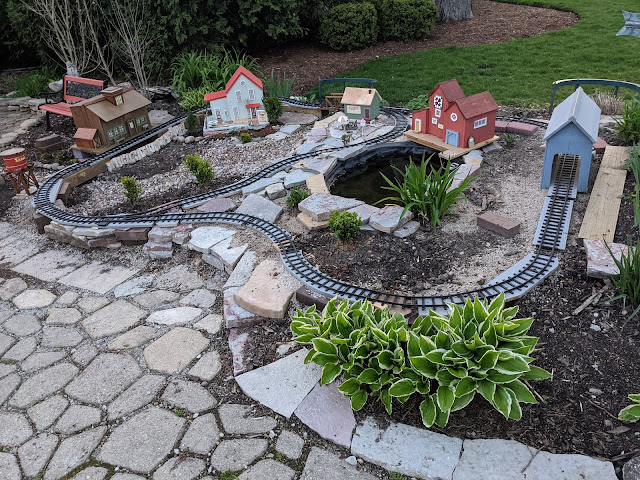 I was out walking one morning and came across this little garden railway.  It is not too far from our house, but I've never come across it before, despite walking around for the past few years.  It totally reminds me of the Epcot garden train that is just outside the Germany Pavilion - I've posted a photo of that railway here.

This setup isn't huge - maybe eight feet by six feet and has a couple of switches and fie buildings.  There is no locomotive or rolling stock out, so I'm guessing that they run this seasonally.  The pond is a nice touch, too.  There's a little bench for kids to sit in on the far left of the photo above, so it wouldn't be too much of a stretch to think that this is a grandpa's house/railway that he runs with his grandkids.

I *think* this is O Gauge - or thereabouts - and not a big garden train nor a train the size of Walt Disney's where you could 'ride aboard'.  There are a few cars from the Carolwood Pacific Railway that are in the side lounge of the DVC building at Boulder Creek Villas (Wilderness Lodge) that you can peek at on your next trip.

I've longed after a garden train, so it is nice to see someone like this - in our own neighborhood - take some initiative and bring a garden train to life.   Maybe the Mantleburg Line should move outdoor and run seasonally - opposite it's normal Wintertime operation?
#RandallPark backyard trains disney trains garden train mantleburg line model trains o gauge Randall Park walt disney
Location: Randall Park, 749 Randall St, Downers Grove, IL 60506, USA