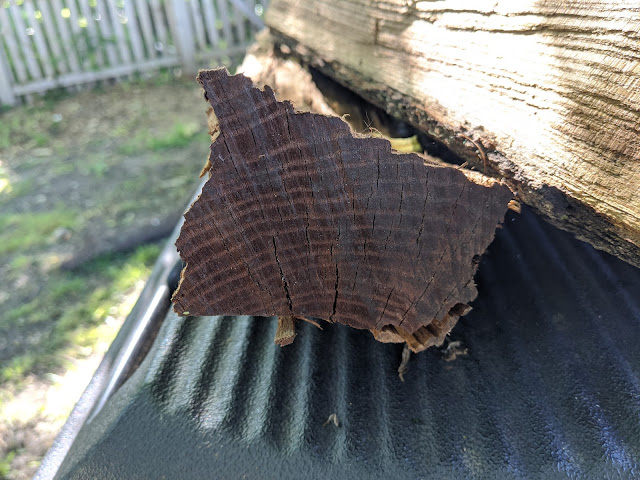 Back in the of last year, I took a bunch of rounds from hardwood trees that our neighbor took down to build their house.  That pile was mostly Ash trees, but there were also a few Mulberry rounds that were included.  I didn't really know what they were, but after I identified that Mulberry tree - I processed it the same way as the Ash.  However, that Mulberry was alive when they took it down and that meant that it was heavy and wet.  And...weirdly yellow.  I split it over a number of months this past Winter and by March, I had all that I was going to split up done for the Winter with just a few larger pieces left.  If you look at the bottom photo of this post, you'll see what the wood looked like when split.  In April, I started to work through a few more rounds including more Mulberry and found a yellow heartwood with purple under the bark.

Fast forward to today.  The pile that I had stacked came tumbling down a month or so back.  It wasn't stable, so one day, I found about 50% of the chopped wood laying in a pile instead of a neat stack.  So, I finally got around to re-stacking the wood that was laying on the ground - and decided to make an adjacent, smaller stack.  When I was picking though those pieces, I was struck by the changes in the Mulberry.

It has gone from bright yellow to a rich, dark brown.  You can see that in the photo at the top - the edge is basically the same color as the sides, despite the photo showing what seems to be lighter sides.

But, most importantly, have a look at the "checking" that is going on with that piece in the top photo.  From the Southern Pine Inspection Bureau, they talk about wood checking:


Checks are a separation of the wood normally occurring across or through the rings of annual growth and usually as a result of seasoning.

As you know, burning seasoned firewood is important - and commercial distributors of firewood (like Best Firewood), talk about how they season their wood.  Sometimes it is kiln-dried.  Sometimes it is just simply seasoned in a stack.  This video from Outdoors with the Morgans on YouTube has seven ways to tell if your wood is seasoned - and includes 'checking' as one of those seven.

We're still four or so months away from burning season, so this wood has plenty of time to continue to season.  But, the darkening AND the checks are good signs that it is on the way to being ready.

Below, you can see a few more pieces of this Mulberry wood - with all of them showing some signs of checking. 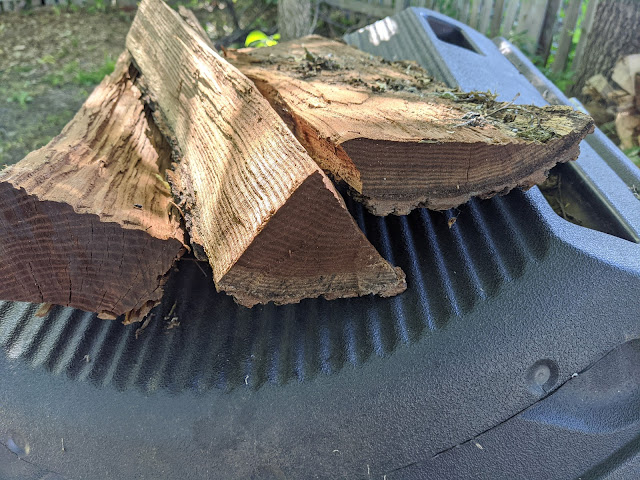 I'll be working some of this into the mix this Fall - along with the hardwoods we have delivered.  I'm thinking that I have about a face cord of Ash, Mulberry and even some Oak in the back that will be ready for the season.
firewood firewood planning firewood processing moisture in firewood Mulberry Trees