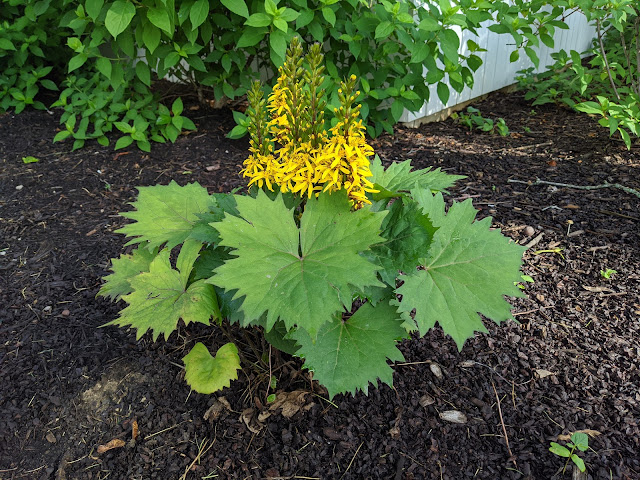 I don't seem to have posted about these yellow perennials in our front yard, despite them being planted before we moved into our new house back in 2017.  We started with three.  All of them didn't make it that first year and were replaced.  Today?  Just one of those replacements is still alive.  The rest of them - which are situated underneath the large Maple tree - haven't come back.

The oldest post I can find that shows these is this one from 2018 when I can see two of the replacements still alive.

That Maple tree - which provides some shade for this remaining Bottle Rocket Spike Ligularia is the same one that I posted about having some stress in the canopy.  I also think have a theory that the Maple tree is competing for resources with everything within it's dripline and that's one of the reasons these Ligularia haven't fared well.

I've haven't posted any of these in the Garden Diary, but I did mention them in some of my backyard planning posts.  Why?  Because our plan calls for five of them in Priority Area #2.


Next to those hostas would also be another 'bridge' planting of five (5) Bottle Rocket Spiked Ligularia. We have three of those in our front beds that have not done particularly well over the years, but when they flower - they have these beautiful yellow spikes that are striking. These are currently planted in clay and I would say that the area is not often moist - more often very dry - and not too fertile.

That's the mention that I referenced earlier.  I wanted to dig in a little to find out what they'd like and this post from Walter's Garden talks about the conditions:


Ligularias are at their best when grown in cool, moist locations in part shade. Protection from the hot, afternoon sun in the south is essential to prevent wilting.


The photos in this post are here for the garden diary and - what I hope will be - some repeated coverage in the months to come.  But...I found one more photo of some of the foliage peeking out from behind the Maple here.

Here, below, is a look at this thing blooming yellow in early July, 2020: 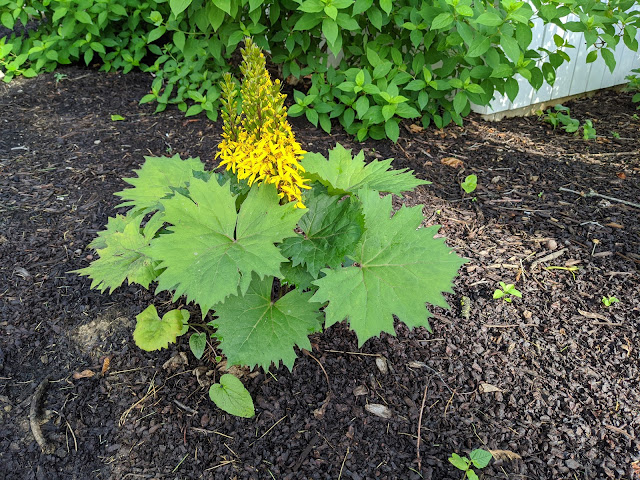