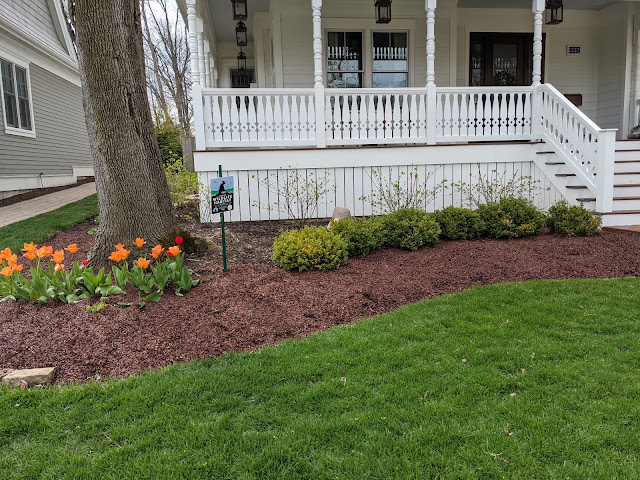 A couple of days ago, I posted a before/after photo of our Magnolia tree and the cocoa bean shell mulch that I added and mentioned that I had brought home just 10 bags of cocoa bean hull mulch from Lake Geneva.  Today, you can see our front bed with the balance of the bags laid down.  I was able to add mulch from the front of the bed to around and *just* behind the boxwoods.  We have three Vanilla Strawberry Hydrangeas behind the boxwoods that I didn't have enough mulch in the bags to cover at this point.

From this point of view - and down lower near the sidewalk, you can't see *behind* the boxwoods, so it kind of looks finished despite about 50% of the bed not being freshly mulched.

When we go back up to Wisconsin in the coming weeks/months when we drive two cars, I'll head over to the Hull Farm and pick up ten more bags of the stuff to finish off the bed.

On the far left of the photo, you can see one of the limestone blocks that I installed to create that 'ledge' to try to retain the floating mulch and you can also see a few of the reddish Crystal Beauty Fringed tulips that have joined their orange Double Late tulip flowers in showing up for all to see.

Also, if you look closely, you'll also see one of the hostas coming up in front of the tulips.

The boxwoods are showing some signs of growth, but the one on the far right - to the furthest north - continues to struggle with a big gap/hole in it that hasn't quite recovered after a bad Winter a few years back.   Here's a recent look at this set of boxwoods on February 1st of this year that shows some of the Winter burn at that time.  All of them - but for the far left one - seem to have shrugged off the orange parts.