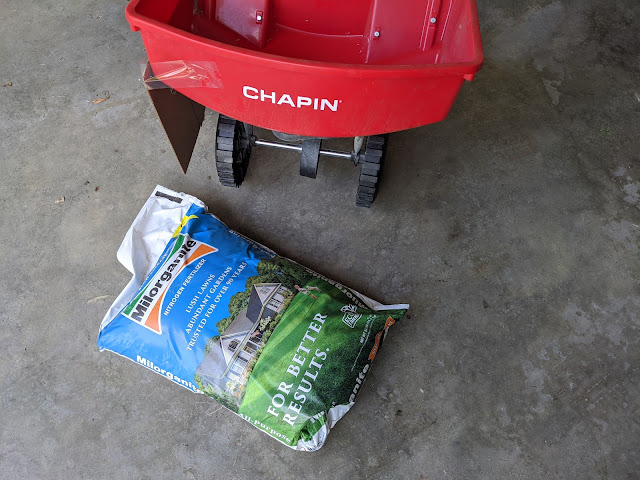 The hot, hot heat has hit the Chicago Suburbs.  We've had 90-degree temperatures for the past few weeks and it has NOT been a good environment for anything living outside - including our grass.  Lawns in our neighborhood are struggling.  Even ones with built-in irrigation.  Ours is no different.  I've been cutting it VERY LONG (setting #5 on the mower - all the way up) and watering it as frequently as I can - typically in the very early morning.

Here's how it is looking right before I feed it the usual "4th of July" application: 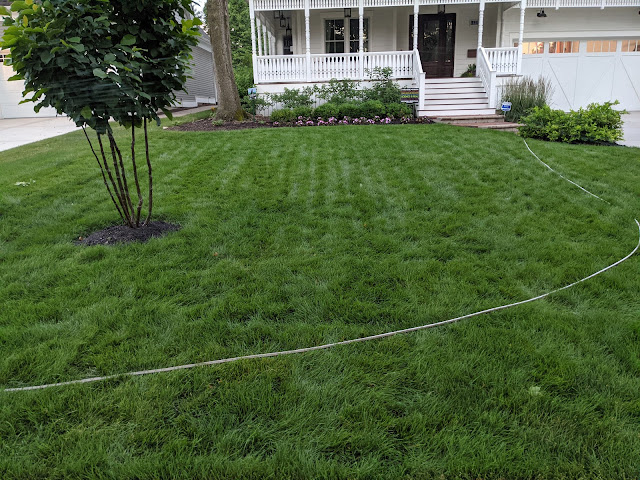 It is green, thick and lush - which I'm happy with for the most part.  I'm almost 100% certain that the reason for the partial success this season is due to the tall cutting height.  I have other parts - like in the back where the Automower cuts - that are cut shorter that aren't as healthy and other parts where the grass appears to have gone dormant.

As for the timing of this post and the lawn schedule, I'm just getting around to posting the photos of this bag of Milorganite that I put down on three of the four sections of our front yard on Tuesday, July 7th.

My 2020 Lawn care schedule calls for one bag of spoon-feeding right around the 4th of July.  And a bag of Ironite.  Now, looking at that, I've decided to space those two things out a bit.  I have the bag of Ironite on hand, but - for now - I'm not going to use it.

The bag of Milorganite you see at the top of the post account for the second feeding of the season - with the first application at Memorial Day.  The schedule calls for a full application coming up around Labor Day.  Then again after Halloween.   But, this is just a 'spoon feeding'.  Consisting of just one bag for the whole front yard.

So...what is spoon feeding?  Milorganite has a little blurb about it - not sure if they invented the terminology?  From their site:


Superintendents like to keep golf greens an even green color throughout the season. To do this, many superintendents apply small amounts of fertilizer either weekly or bi-weekly. This practice is called “spoon feeding," and the recommended application rate is 0.1 lbs. of nitrogen per 1,000 sq. ft.

The objective of these small applications is to keep a steady supply of nutrients available to the plant at all times. This eliminates peaks and valleys in nutrient supply that is common with large, infrequent applications.

So, this one bag is a little less than half of what I put down on the same area at Memorial Day.

I'm hoping this little dose of Milorganite will help keep the lawn green and happy - and my plan right now is to look to put down the Ironite right at the beginning of August to give it a dark green shot.

I also gussied up my Chapin spreader.  I received it last Fall as part of a user trial with the Get Sunday fertilizer product and I've used it as a replacement for my old, ratty Scott's spreader.  There are some a few things that I don't LOVE about the Chapin spreader, but one feature of that I wish it had was an edge guard.  Scott's - even in the cheap, basic ones, has an EdgeGuard that helps keep the fertilizer from flying across property lines and on driveways/sidewalks.

You know....to get that domination line?

I took a decidedly low-tech approach to hacking my Chapin spreader to try to create a pseudo-Edge Guard:  part of a cardboard box and some shipping tape.  Here, below, is the prototype. 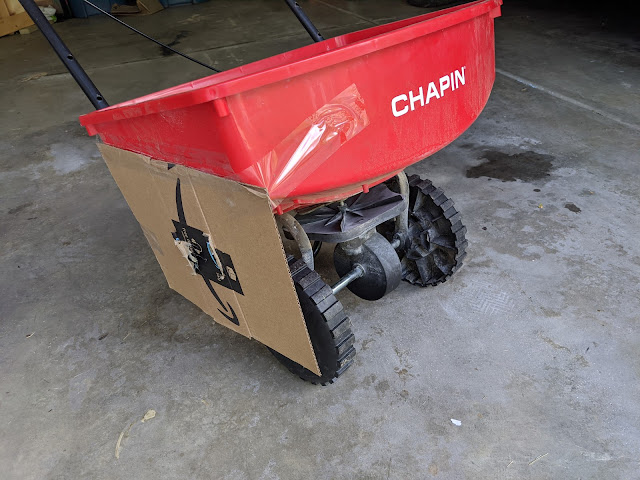 A little shipping tape applied to the side, then wrapped around the front and back and....I have something in place that blocks a lot of the sideways projectiles. 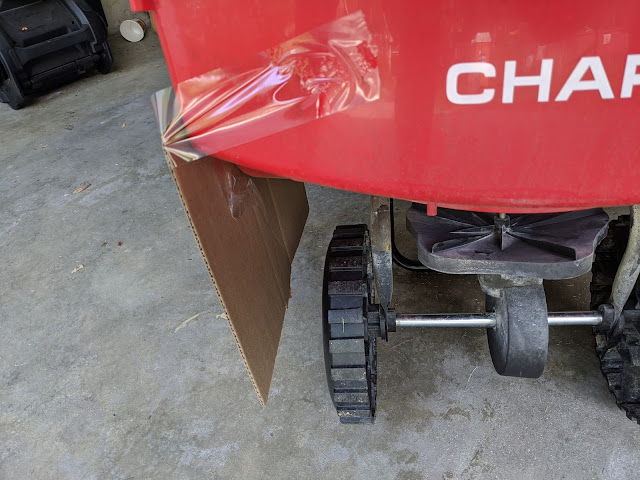 I used this modification to the spreader and laid down one bag of Milorganite on three of the four parts of our front:  Main yard, main parkway and north of the driveway.  Made it a little bit easier to blow off the driveway and sidewalk, too.  We'll see if it helps create that 'domination line' in a week or two.
#lawngoals 2020 lawncare fertilizer fertilizer schedule green grass lawn care Milorganite spoon feeding spreader turf
Location: Downers Grove, IL, USA