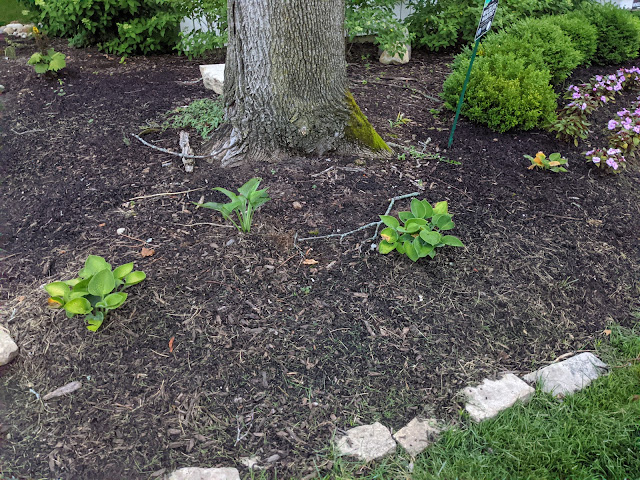 A couple of weeks ago, I bought a Shadowlands Empress Wu hosta from Home Depot and didn't really have a plan for where to put it in the garden.  It was small (1 gallon nursery pot) and inexpensive ($4.99), and I knew that it was a 'large' hosta, so I grabbed it and figured I'd sort the location later.  After keeping it in the shade and keeping it watered for a while, last week, I decided to plant it in the front yard bed - out front of the large Maple tree.

That's it in the photo above - the second from the left - in a series of hostas.  When we did our initial planting, the guys at Green Grass planted three hostas and while they've survived, I don't think that they've thrived here.   Why? I'm thinking that is because they're competing for resources with the tree?  That...or they are a miniature hosta variety.

Planted it between a couple of them and a little bit further back - closer to the tree.  If you read that original post on the Shadowlands Empress Wu hosta, you might remember that it can grow to five feet wide, so I'm hoping that this will fill in some of this space in front of the tree - where the tulips come up in the Spring. 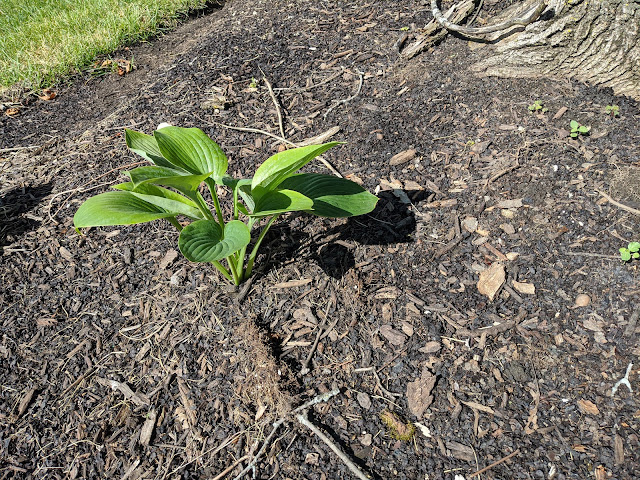 You might not be able to tell, but I count 10 'leaves' on this hosta when I planted it - so that's something to watch going forward.

I'm going to use *this* hosta as a barometer to answer the question of whether things can grow here while competing with the large Maple tree.  We'll watch this over the coming weeks to see how it does in the first season.
empress wu hosta front beds front porch beds front yard front yard landscaping garden diary Hostas
Location: Downers Grove, IL, USA