The last time I shared a photo of our pair of Cordon Espalier'ed Greenspire Linden trees was back when I gave them a hard prune in July of this year.  Two months later, the trees have shown some new growth and are filling out the levels of the horizontal cordon.  I've decided to go with four levels and you can see those four levels starting to stand out in the updated photo below. 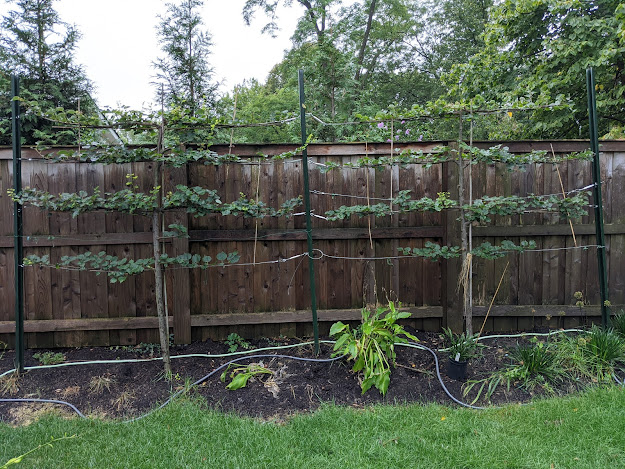 After the pruning/shaping that I did earlier this Summer, I'm now seeing some direct response in the form of new light-green growth.  Check out the photo below for a closeup showing some of the new growth:

In both trees, the second from the bottom set of horizontal branches are the strongest/most vigorous.  Followed by the top level - which I think is a reaction to pruning off the apical meristem.  The bottom level is the newest to emerge and to be trained.  If you look closely at the espalier wire system behind the trees, you can see that the lowest level isn't the same as the rest.  It is - on the right tree - just simply tied in a knot on one side.  That's because these lower branches weren't there when we started.
If you look back to March of 2019, the branches on the tree on the left weren't even present.  So, they've grown fast since then.
Also, for [garden diary] purposes, I want to note the top level of the tree on the left - the edges are curling up and need to be trained down straight.
For length (or width), the tree on the left has 7 of 8 branches that have reached their desired length.
The tree on the right has 3 of 8 branches that have reached their terminal length.  Three that are close.  And the bottom two that are short right now.
Additionally, the tree on the left has two stubs that I've left on in an attempt to thicken up the trunk and not prune off too much at one time.  I'll look to remove this Winter - before the tree comes alive.  That's what Martha Stewart recommends with pruning Linden Trees:

The best time to prune the American linden is while the tree is dormant during the coldest winter months. It’s best to complete all pruning before early spring when the buds begin to form. Dormancy pruning reduces the amount of stress placed on the tree. The reduced flow of fluids in the tree during the time helps the pruning wounds heal quicker.

I'm thinking that I'll leave the wire system in place for all of 2021, but come the Spring of 2022?  I'm thinking the branches will be strong enough to remove the supports and have them grow independently of the wire and post system.
backyard espalier garden diary greenspire lindens linden trees trees
Location: Downers Grove, IL, USA