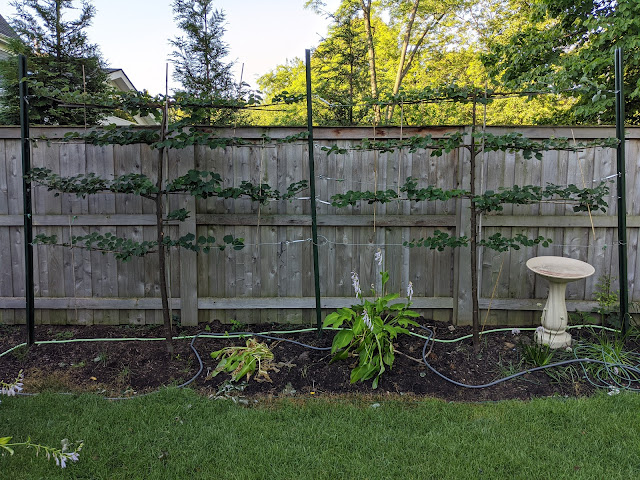 The last time I checked in on the full look of these Greenspire Linden trees was last Fall - November of 2019 - when they were heading towards dormancy.  At that time, the trees had been pruned for the year and had grown through a full growing season.  I also - at that time - was planning a different style of espalier: a candelabra.  If you go back and look at the photos in this post from November, you'll see how I was adding vertical supporters via bamboo rods AND encouraging more than 4 horizontal branches on the trunks.    The tree on the right - I had five or six horizontal branches.  And the tree on the left, I had five or six branches too.

This past week, I went out to these trees with my bypass pruners (Alas...I don't have a pair of those sexy Niwaki Secateurs) and gave these trees their annual mid-year prune.  I normally take care of any branching that is pointing downward from the branches - and I did that this year.  But, I also made a call:  Forget the candelabra.  I went back to my original thinking and pruned back everything to a 4-level horizontal cordon.

That meant that for the tree on the right, I removed ALL the branching from the trunk, the limbs that seemed to be acting as the apical meristem.  Have a look at the photo at the top and you'll see the four horizontal cordon branching.  And it seems that way with the tree on the left, too.

But, have a look at the photo below.  The green shows the width of the four branching/limbs of the espalier on both trees.  But, the tree on the left has two small yellow arrows, too. Why is that?  Because, I pruned that tree second and I was having some, ummm, pruning remorse.  I wanted to clean up the trees and have them focus on the four main branches, but I also didn't want to prune TOO MUCH away and hurt the tree.  Being chicken means that I pruned those branches down, but left them on with some leaves on them.

I'll hit these up with some water this week to give them a little assist in recovering from the pruning, but I'm hoping that they'll spend the rest of the growing season on the four horizontal sets of branching.    When these trees come back next year, I'll lop off those two short, stubby limbs and have them all cleaned up.


I'll be looking at the caliper of these trees and start to think about measuring the caliper of the branching now that I know there will just be 16 branches.   More on that in a future post.
backyard espalier garden diary greenspire lindens linden trees trees
Location: Downers Grove, IL, USA