The last time I checked in on out compost bin was in May of this year before the heat of the Summer worked to heat up the pile.   At that time, I had the 3 bin setup in the easement behind our yard.  One active bin, one carbon storage bin and one nitrogen storage bin.  Earlier in the Spring, I worked to install a passive aeration system by inserting six 2" perforated pvc pipes in the bottom third of the pile. But as fall arrived, I've come to realization that the pile isn't in enough sun, so I thought that I'd move it to a place where I think it can get a little more heat.  That meant deconstructing and digging out the full pile.

When I dug out the bottom of the pile, I came to the realization that something had occurred.  Why?  Because we had some black gold.  Either time.  Or the passive aeration.  Or both? Something exerted the right pressure on the pile and transformed our yard waste into that black gold.

The other thing that I noticed is the shrinkage.  The pile, which was full almost to the top of the bin had compressed down to about 18" to 20" tall of that black gold.

Being October, I decided to just pile the stuff back in the new location of the bin in order.  Also, because, that's how it came out - and into my wheel barrow.

Here's what the new location of the bin looks like after I filled the active bin with the balance of the 2019 black gold and then started to put this year's leaves on top - mixing in grass clippings to try to get that right balance between browns and greens. 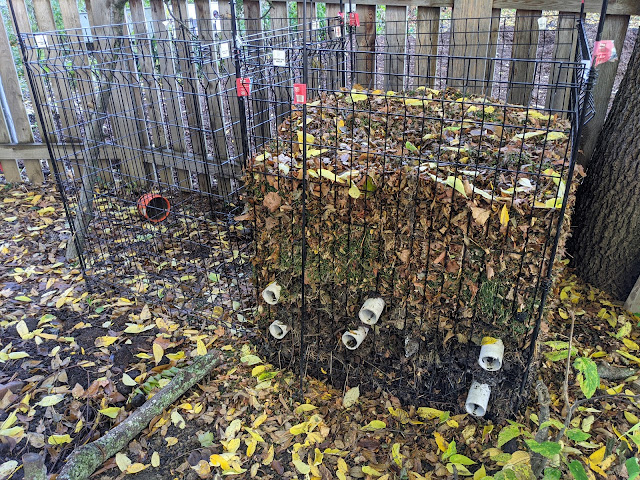 I use these 'no dig' fence panels (from Menards) for my bin, but in the past, I've only had 3 sides to each of my bins.  And since I had them lined up, the bin in the 'middle' really only had one (the back) panel.  For aeration reasons, I'm planning on spacing them out a little bit - maybe just an inch or two - but that requires EACH bin to have 4 sides and 4 corners.

I'm also planning on continuing my Fall cleanup using my mower, which will (I hope at least) give me the right combination of browns/greens.  Will take a few more photos when I close out the year and get these bins full with an active mix and one mostly made out of brown/carbon storage ahead of Winter.