In March of this year, I posted some photos of a few different things in our yard that had suffered what I believe was rabbit damage.  These trees and shrubs emerged from Winter with parts of the limbs clipped right off by what I think was a hungry rabbit (or rabbits) that were looking for some food when snow had covered everything.  Why do I think it was rabbits?  Well, first of all, because we have plenty of rabbits.  And second, this post from Mom.com:

During the winter months, rabbits survive by foraging for food under the snow. Because vegetation is less plentiful during the winter, rabbits may increase their intake of tree bark and conifer needles.

This year, I decided to take a proactive stance against these rabbits (no offense, guys.  I'll try to supplement what you eat this Winter) by erecting a barrier that would make it difficult for them to get to the trees.

I decided to use poultry netting (or, as my family called it:  chicken wire) to create a little fence around these trees.  I made the ring of fence a little wider than the tree itself.  You can see these two little trees - that have put on some decent growth this year - in the photo below. 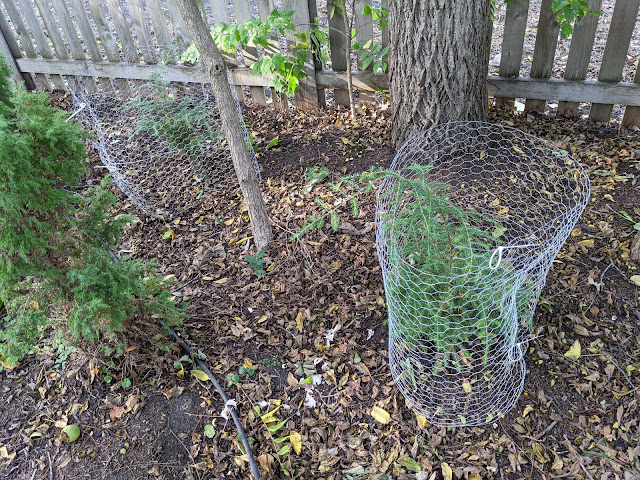 My plan is ring these fences at their base in wood chips to create a little barrier to prevent the rabbits from burrow'ing under the fence to get to these tasty morsels.
I have at least one other Hemlock that I'm going to fence to protect from rabbits, but also a few other things - like the yews and the roses.  Each of those with a different purpose.  Yews to protect from rabbits AND cold.  Roses to protect from cold.
canadian hemlock chicken wire garden diary hemlocks protection winter damage winter preparation
Location: Downers Grove, IL, USA