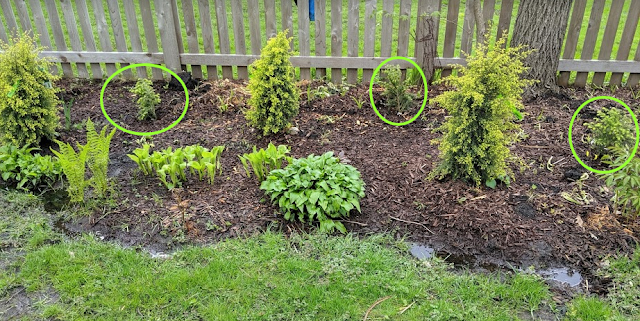 Back at the beginning of May, I posted a photo that showed three of the six Canadian Hemlock tiny trees that I bought with a credit from an online nursery.  These things are tiny.  The official name is Tsuga canadensis. Sometimes they're called Canadian Hemlocks. Sometimes Eastern Hemlocks. Maybe 16" tall.  I mentioned in the post that I put the first three in the far back reaches of our yard and that I was planning on putting the other three on the northside.

These aren't the first Hemlocks that I've planted, unfortunately.  I bought a tiny one just like these at Menards on a whim and put it in the ground last Summer.  By September, it was gone.  Done.  Not sure what happened to it, but I also lost our little Fraser Fir at the same time.  Guessing it was neglect via limited water?

The three trees that are in this post (circled in green in the photo above) are the same trees that are specified in the landscape plan portion that I posted about in June of last year.  You can see that the landscape designer called for three of these trees clustered together with two kind-of "in back" and one more out front.

I initially planted these three tiny Hemlocks closer to the fence, but then reconsidered.  While they're small, the would have plenty of room to grow, but when they grow (and...as a gardener...I'm one who is always going to bet on tomorrow!), they would be squashed right up against the fence and likely suffer a bit.  It was hard for my tiny gardener brain to want to space them out this far, but I know it is the right thing to do.  Sure doesn't look like much now, right?  But, if I tend to them and give them some attention, I'm hoping that in a few Summers, we have something that looks like this.

Oh...and I should note to myself that in the same photo at the top are the three Gold Cone Junipers that I planted this Spring.  They're shrubs, so you won't see them on the list at the bottom of this post, but they're now in a position to kind of have an evergreen-layered effect with the Hemlocks as they grow.  The Gold Cone Junipers are at their show-y best right now throwing off a bunch of new growth that is quite lovely.    With time, I think the Hemlocks will provide a nice background for the contrast of the Gold Cone Junipers in this spot.   In fact...I've been thinking more about the concept of a "layered garden" as we begin to build out our full landscape beds.  I requested this book from the Downers Grove Public Library to study up on the concept.  I'm sure that I'll post some details from it.

There were two reasons why we have Canadian Hemlocks in our landscape plan (we have nine of them specified!):  first...is because they do well in shade.  And we have plenty of that.  The other...is that we like them!  Nat's Mom has a few and I've really liked how they look.  When I mentioned them to our designer, he was happy to include them.

I presumed they were going to be happy and healthy.  But then I watched this Ted Talk about bringing back the American Chestnut Tree.  (psst...go watch it, it is awesome!)  Near the end Dr. Powell mentions that what happened to the Chestnut (it was wiped out!) is happening to other trees and that we need to be mindful.  One of the trees he mentions is the Hemlock.  Gasp!  That got me doing a bunch of Google searches to find out what the heck is killing Hemlocks.  Turns out, it isn't a disease.  It is a pest.  Kinda like the Ash Borer that tore through Illinois?  They both came from Asia.  Likely via shipping crates.  And then really took off here in the US.  This is not borer but an Adelgid.

A little research and I discovered that the pest known as the Hemlock Woolly Adelgid has been spotted in Michigan and Indiana, but it doesn't appear to have been spotted (knock wood) in Illinois.

There appears to be thinking that with time, we can help protect these Hemlock trees from the Woolly Adelgid via the use of a "systemic insecticide" per the Michigan State University Forestry Division of their Extension Office.


A simple treatment method for homeowners entails applying a systemic insecticide to the soil around the tree trunk base. The insecticide is absorbed by tree roots then transported within the tree to the shoots and needles. The active ingredient (i.e., the toxic compound) in products available to homeowners will be either imidacloprid or dinotefuran (Table 1). Imidacloprid is absorbed by roots and moves through trees relatively slowly, sometimes taking a year to reach the shoots in the top of a large tree. The advantage of using imidacloprid, however, is that one application will protect the tree for at least four years.

The insecticide of imidacloprid is one that I've mentioned before this month in the post about grubs and grub treatment.  It is the active ingredient in the Menards brand of grub treatment, but there are also some specific tree-and-shrub products that include it as the ingredient like this one from Ortho.   I suppose the question I have is whether I can just apply the granular grub product in/around my hemlock trees or if I should spring for the tree-specific stuff?    I'm thinking that since these trees are so small, I can likely help them with a small application, right?    Next time, I'm at Menards, I'll try to remember the tree-and-shrub specific product.  I can add it to the hornbeams and maples to protect those as well, right?

As for the trees in our yard, these six new ones this year are really small.  That's ok, but just mentioning for when I go back through the garden diary.

Here's the full list of trees that we've put into the yard since we bought the property in 2016 and moved in during the Summer of 2017.  32 trees planted.  27 trees currently alive and adding to our landscape.

2017 (9 planted. 3 Died. 6 of the original annual total alive now):
1. Flowering Pear in backyard on north side.
2. Flowering Pear in front yard by garage. (LOST and replaced)
3. Japanese flowering cherry
4 and 5: 2 Lindens that I espalier'd and placed by the south fence line near our kitchen windows.
6. A Dawn Redwood from Earth Day 2017 (LOST and replaced)
7. Nat's Saucer Magnolia in our front yard
8. A Corkscrew Willow all the way in the back (LOST)
9. A Crimson King Norway Maple near the trampoline
2018 (17 planted. 2 Died and weren't replaced yet. 2 were replacement from 2017. 15 of the original annual total alive now):
10. Another flowering pear from Earth Day 2018
11. Red Maple Sun Valley tree from Earth Day 2018.
12. Weeping Cedar tree - our first evergreen.
13. The weeping flowering cherry tree that the Babe planted for Earth Day 2018.
14, 15, 16, 17, 18, 19, 20, 21. These Frans Fontaine Hornbeams.
22. A replacement Chanticleer Pear tree (3" caliper) out front by our garage
23. Our second evergreen - a short Fraser Fir Christmas Tree out by the trampoline. (LOST)
24. This Canadian Hemlock that is the first of nine that our landscape plan calls for in the backyard. (LOST)
25. Our replanted/replacement Dawn Redwood. Same spot as the first.
26. This teeny-tiny Bald Cypress that I planted in the front yard, in between our driveway and our neighbor to the north.