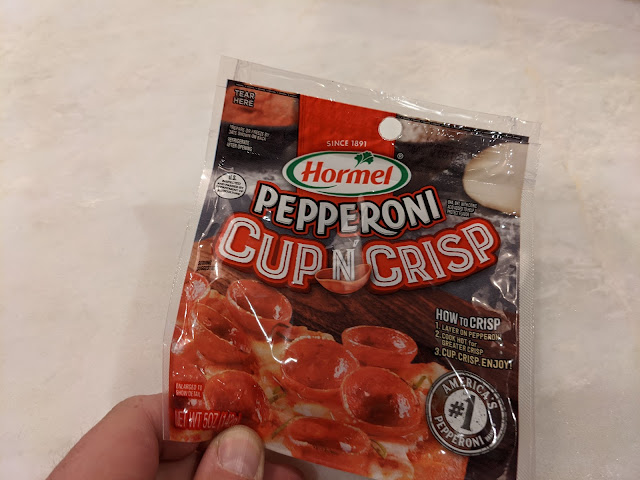 Just about two years ago, I posted some photos of the new (to me) Ezzo pepperoni that I bought online that was billed as 'cup and char' pepperoni.  I was a little bit late to trying the Prince Street Pizza square that seemed to have kicked off the cupping pepperoni trend, but I was able to get to it in April of 2019 and found it to live up to the hype.  For me, the Ezzo stuff was hard to get (had to order online), so it wasn't something that I was getting all the time.  I had a really nice, thick-cut replacement that Mariano's carried, but they stopped carrying it for some reason during the pandemic.

That's when I put my antenna up about new pepperoni.  Over the past year or so, I've been hearing/reading about Hormel introducing something called Rosa Grande.  It is, however, foodservice only.   After reading up on the PizzaMaking.com forums, it turns out that most people there believe that this latest market entrant:  Cup N Crisp from Hormel is really the same stuff as Rosa Grande.

Hormel has search ads up that I find cute:  they bill this as pepperoni "innovation":

Here's the site for Cup N Crisp Pepperoni that says they also have this in 'bold'.

I picked up this bag from Mariano's - they have it available for curbside - so I'll give it a shot.  More to come once I get back into winter pizza making.